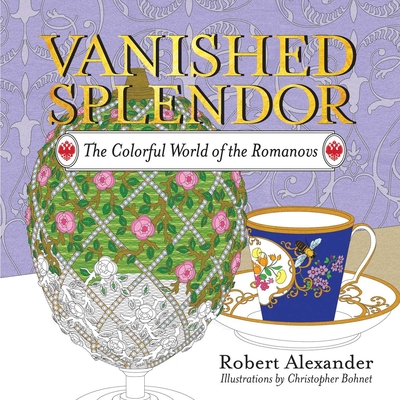 The Colorful World of the Romanovs

A striking new coloring book depicting the richness of the last days of the Romanovs, allowing users to experience splendor, majesty, and mystery of lost Russia.

Drawing from decades of work, travel, and research in Russia, Robert Alexander has created a stunning coloring book with every detail rooted in the rich, colorful history that was the glory of Imperial Russia.

Depicting the grand world of Nicholas and Alexandra Romanov—from their imperial palaces, costume balls and gowns, to jewels and Faberge objets d’art, and the magical meadows and forests of their empire—Vanished Splendor is a treat for the eyes and a delight for history buffs. Infused with Robert Alexander’s deep knowledge and love of Russian culture and art and detailed by Christopher Bohnet’s intricate skills, the coloring book captures in soul and spirit the fascinating era of the Romanovs, where nothing was done until it was overdone.

It is a coloring book like no other—and all it takes to bring that magical time to life is the stroke of a colored pencil.

Praise For Vanished Splendor: The Colorful World of the Romanovs…

"Through the power of the author’s imagination, we see not only the tragedy of the Emperor, but that of a human being, man, and father."
— Ivan Artsyshevsky, The Romanov Family Association [praise for Robert Alexander]

"A gripping and entirely believable description of the last days of the Romanovs... Thoroughly enjoyable, educational, and just a good old-fashioned page-turner."
— Margaret George, author of 'Mary, Called Magdalene' [praise for Robert Alexander]

Robert Alexander is the New York Times bestselling author of The Kitchen Boy (soon to be a major motion picture starring Kristin Scott Thomas). He has studied at Leningrad State University, worked for the U.S. government in the former U.S.S.R., and traveled extensively throughout Russia. He lives in Minneapolis.

Christopher Bohnet is an artist, illustrator, graphic designer, and the owner and founder of xt4, inc., a boutique design firm. He lives in Minneapolis.
Loading...
or
Not Currently Available for Direct Purchase