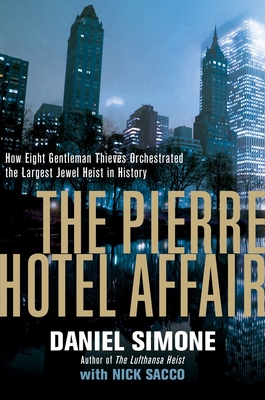 Bobby Comfort and Sammy “the Arab” Nalo were highly skilled jewel thieves who specialized in robbing luxury Manhattan hotels. With the blessing of the Lucchese Crime Family, their next plot targeted the posh Pierre Hotel—host to kings and queens, presidents and aldermen, and the wealthiest of the wealthy. Attired in tuxedoes and driven in a limousine, this band of thieves arrived at the Pierre, seized the security guards and, in systematically choreographed moves, swiftly took the night staff—and several unfortunate guests who happened to be roaming about the lobby—as hostages.

The deposit boxes inside the vault chamber were plundered and the gentlemanly thieves departed in their limousine with a haul of $28 million. But then matters began to deteriorate. The authorities immediately suspected Comfort and Nalo of masterminding The Pierre ambush and arrested them, but the veteran criminals kept their mouths shut. The Lucchese Family funneled a $500,000 bribe to the presiding judge to quash the charges—and to this day The Pierre Hotel caper remains unsolved.

A suspenseful narrative of Mafia intrigue, police corruption, and personal betrayal—which concludes with a poignant love affair—this is the true story of the most famous hotel robbery in American history.

Praise For The Pierre Hotel Affair…

"If you loved the television series Mad Men, hanker for a time when jewel thieves were referred to as “gentlemen,” and wish all business lunches revolved around three or more martinis, then it’s likely you’ll find something to like in this outrageous true life tale."
— New York Journal of Books

"Written in a sensational and lurid style, reminding me of an early Mickey Spillane crime thriller, the book recounts the detailed planning of the robbery, the robbery itself and the bloody aftermath. A tale of mendacity, greed and violence."
— Washington Times

"Daniel Simone has done it again with his latest outstanding tale. This literary work had all of the ingredients of a major blockbuster. The perfect book, about the perfect crime!"
— Hamptons TV

"Simone tells this engrossing tale directly, and he is one helluva writer. Like many of the most compelling true crime tales, the distinction between cops and robbers is blurry at best. Fine reading."
— Booklist [praise for 'The Lufthansa Heist']

Before becoming a writer, Daniel Simone was an aerospace engineer who worked on the Apollo Lunar modules. Besides having ghostwritten the biographies of two prominent actresses, he is the author of The Lufthansa Heist. Daniel lives in Amagansett, New York.

As a young operator in Lucchese crime family, Nick 'the Cat' Sacco specialized in jewel thefts. But he had a distinctive quality; he never harmed any of his victims. Sacco is the sole surviving bandit of the famed Pierre Hotel siege and robbery. When he entered the Witness Protection Program in 1974, Sacco was one of wealthiest and most wanted jewel thieves in America.
Loading...
or
Not Currently Available for Direct Purchase