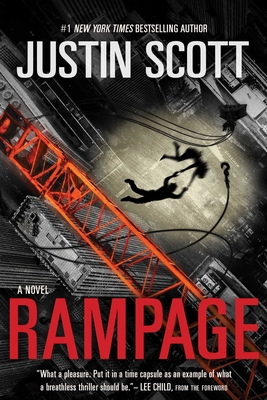 In the thirtieth anniversary edition of this classic thriller, "Rampage gives a stunning twist to the expression 'war on crime.' The dizzying action ranges from Manhattan's towering spires to the labyrinths of the city's underworld; its plot has the speed and impact of a jackhammer.” —David Morrell

Chris Taggart is a ruthless, driven, real estate entrepreneur whose buildings have changed the skyline of New York. Young, handsome, irresistible to women, Taggart has won it all with his bare hands and fierce ambition. But his dazzling success can never erase the bitter memory of his father's death at the hands of the mob—and now Taggart sets out to use his wealth and power to destroy the men whom he holds responsible.

It is a secret vendetta—a war, in fact—that Taggart launches single-handedly against the Five Families of New York. It pits him against some of the toughest men in organized crime—as well as his own brother, a crusading assistant U.S. attorney, one of the strikeforce prosecutors.

Taggart risks his fortune, his reputation, finally his life, to get revenge; only to find that he has instead become one of them, that his triumph over criminals has turned him into a more dangerous threat than any mob boss in New York.

"A nightmarish excursion of revenge, with everything going for it: tension, pace—and the sheer fascination of great storytelling!"
— Clive Cussler

"This genre classic is as fresh and readable as it was three decades ago."
— Publishers Weekly (Staff Pick)

"Scott, author of The Shipkiller, has created realistic characters, dialogue, and settings, and an exciting plot that explores in detail the emotional and legal consequences of revenge and vigilanteism. Rampage is an unusual Mafia novel in that it is almost devoid of graphic violence and sex. Very well done."
— Library Journal

Justin Scott has written more than thirty thrillers, historicals, and mystery novels, including The Shipkiller, Normandie Triangle, and The Empty Eye of the Sea. His main pen name is Paul Garrison under which he has written the Paul Janson series based on a Robert Ludlum character: The Janson Command and The Janson Option. Scott created the Ben Abbott detective series and was twice nominated for the Edgar Allan Poe Award by the Mystery Writers of America. He collaborates with Clive Cussler on the Isaac Bell series—The Wrecker, The Spy, The Race, The Thief, The Striker, The Bootlegger, and The Assassin. He lives in Connecticut with his wife, filmmaker Amber Edwards.
or
Not Currently Available for Direct Purchase