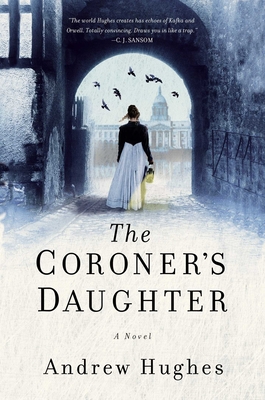 When a young woman uncovers evidence that a recent suicide may have been murder, her investigations attract the attention of a dangerous man stalking the streets of nineteenth-century Dublin.

Dublin, 1816. A young nursemaid conceals a pregnancy and then murders her newborn in the home of the Neshams, a prominent family in a radical Christian sect known as the Brethren. Rumors swirl about the identity of the child’s father, but before an inquest can be held, the maid is found dead after an apparent suicide. When Abigail Lawless, the eighteen-year-old daughter of the city coroner, by chance discovers a message from the maid’s seducer, she sets out to discover the truth.

An only child, Abigail has been raised amid the books and instruments of her father’s grim profession, and he in turn indulges her curious and critical mind. Now she must push against the restrictions society places on a girl her age to pursue an increasingly dangerous investigation. Abigail’s searches begin to uncover the well-guarded secrets of two factions—the Christian Brethren and a burgeoning rationalist community—drawing the attention of a sinister figure who emerges in fleeting glimpses and second-hand reports: the man with the lazy eye.

Determined, resourceful, and intuitive, Abigail Lawless emerges as a young lady sleuth operating at the dawn of forensic science.

Praise For The Coroner's Daughter: A Novel…

Hughes takes great relish in describing the occupational hazards of being a smart woman in restrictive times. Although social class, religious fanaticism and early forensic medical procedures are all duly explored, I confess to being more thrilled by the spectacle of a life-size animatronic doll—with rotating glass eyes!—entertaining the guests at that society ball.
— Marilyn Stasio, New York Times Book Review

In this Dublin-set Victorian drama a convicted murderer awaiting the gallows unspools his ghastly, riveting tale.

Andrew Hughes is a wonderfully talented author, bringing Dublin and its surroundings to life with deft characterizations, detailed but never labored descriptions, and a plot which will have readers racing through the pages. An utterly transporting book and highly recommended.

A remarkable first novel...at once a close character study and a sweeping panorama of the era, this fascinating book is a stirring work of fiction and a perceptive chapter in Ireland’s social history.
— Marilyn Stasio

Historian Hughes puts his knowledge of mid-19th-century Ireland to masterly use in his chilling first novel...This beautifully written tale of cruelty and redemption is as unforgettable as it is harrowing.

Andrew Hughes was born in Ireland and educated at Trinity College, Dublin. It was while researching his acclaimed social history of Fitzwilliam Square—Lives Less Ordinary: Dublin's Fitzwilliam Square, 1798-1922—that he first came across the true story of John Delahunt that inspired his debut novel, The Convictions of John Delahunt. Andrew lives in Dublin.
or
Not Currently Available for Direct Purchase