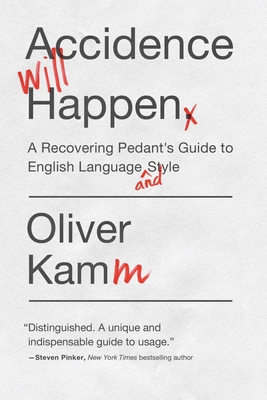 A Recovering Pedant's Guide to English Language and Style

A witty, authoritative, and often provocative guide to the use and abuse of the English language, by the London Times's lead grammar columnist.

Are standards of English alright—or should that be all right? To knowingly split an infinitive or not to? And what about ending a sentence with a preposition, or for that matter beginning one with "and"?


We learn language by instinct, but good English, the pedants tell us, requires rules. Yet, as Oliver Kamm cleverly demonstrates in this new book, many of the purists' prohibitions are bogus and can be cheerfully disregarded. Accidence Will Happen is an authoritative and deeply reassuring guide to grammar, style, and the linguistic conundrums we all face.

Oliver Kamm is a chief columnist for the London Times. As a self-confessed reformed pedant he is the newspaper's unofficial expert on language and style, a subject he tackles in his long-running immensely popular weekly column "The Pedant." He writes two weekly columns: "The Pedant," on language; and a "Notebook" on economics, international affairs, and culture. He is a regular columnist for The Jewish Chronicle, and his writings have also appeared in The Guardian, The New York Times, The New Republic, Foreign Policy, the New Statesman, and many other publications. He lives in England.

Praise For Accidence Will Happen: A Recovering Pedant's Guide to English Language and Style…

A much-needed book that challenges those who want to entomb English, a living language that is in no danger of being destroyed or corrupted by occasional grammatical missteps. Especially refreshing is Kamm’s appreciation of the organically evolving American English, which adds a sense of exuberance to our ‘living language.’ Highly recommended.

This is the most intelligent and entertaining book about the English language I've ever read, one that has transformed how I think about usage. It should be required reading for anyone who loves the language, especially those entrusted to teach it. Pedants are going to hate this book — and quietly take its lessons to heart.
— James Shapiro, Professor of English at Columbia University and author of '1599: A Year in the Life of William Shakespeare'

Accidence Will Happen is a unique and indispensable guide to usage. It's distinguished by the author's keen discernment, his reliance on scholarship rather than dogma and superstition, and an ability to cite literary examples of contested constructions that is literally (yes, literally) awesome (yes, awesome).

— Steven Pinker, New York Times bestseller and author of 'The Sense of Style: The Thinking Person's Guide to Writing in the 21st Century'

The English language is not your enemy and Oliver Kamm is your best friend to help you navigate it. Never has a book on language been so illuminating and funny.
— Agnès Poirier, author of 'Touché! A French Woman's Take on the English

An engaging and sympathetic style guide.

A spirited argument for why modern English and its regional variants enrich and strengthen the language.

Entertaining and refreshing. A welcome corrective to the notion that there is an objective standard we should strive for, and a celebration of a language in flux.
— Ian Critchley

English language sticklers should relax and give our language the freedom it needs to flourish. It sounds a liberating project and he really does manage to make pedants look ridiculous.

Accidence Will Happen is a joyous and joyously liberating assault on the 'rules' of grammar... It is he most sensible style guide I have read, not least became Kamm always puts clarity first. I have only had Accidence Will Happen for a week, and have already referred to it dozens of times. If tis book is a bestseller, as it may well be, its monument will be the liberated prose of the writers Kamm has freed.