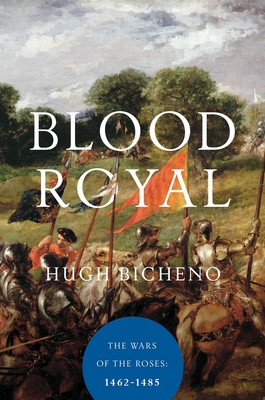 The concluding volume to this rousing two-part history of the Wars of the Roses, England’s longest and bloodiest civil war, narrated by a master historian.

The Yorkist Edward IV has been king for three years since his victory at Towton. The former Lancastrian King Henry VI languishes in the Tower of London. But Edward will soon alienate his backers by favoring the family of his ambitious wife, Elizabeth Woodville. And he will fall out with his chief supporter, Warwick “the Kingmaker,” with dire consequences.

Told with extraordinary authority and narrative verve, Blood Royal is the second part of a two-volume history of the dynastic wars fought between the houses of Lancaster and York for the English throne from 1450 until 1485. Hugh Bicheno tells the story of the Wars of the Roses as an enthralling, character-driven saga of interwoven families, narrating each chapter from the point of view of a key player in the wider drama.

This latest volume describes three Lancastrian attempts to overthrow the Yorkists, ending with the death of Edward's successor, Richard III, at Bosworth in 1485—and the accession of Henry VII and the rise of the Tudor dynasty.

"The author turns upside down some of the most common myths about the war. A well-written conclusion to a history perfectly suited to scholars and students."
— Kirkus Reviews

"Bicheno provides a broad look into the mythologized world behind the archetypal strong, handsome king and the rot that invited power struggles and ruin."
— Publishers Weekly

"Bicheno demonstrates a strong dedication to laying out the complex schemes and motivations brewing during this period. A strong, personality-driven history of these dynastic wars. With its companion volume [Battle Royal], these works offer valuable resources for readers seeking more detail than a single-volume history can provide."
— Library Journal

Hugh Bicheno graduated from Cambridge and later joined the Secret Intelligence Service (MI6). He is the author of the previous books Crescent and Cross: The Battle of Lepanto, Razor's Edge: The Unofficial History of the Falklands War, and Elizabeth's Sea Dogs, but this is his first book to be published in America. He lives in England.
Loading...
or
Not Currently Available for Direct Purchase