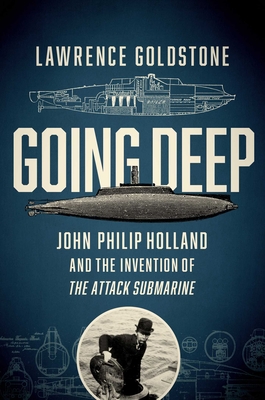 The controversial history of the attack submarine—and the story of its colorful creator, John Philip Holland—that reveals how this imaginative invention changed the face of modern warfare.

From Twenty Thousand Leagues Under the Sea to The Hunt for Red October, readers the world over have demonstrated an enduring fascination with travel under the sea. Yet the riveting story behind the invention of the submarine—an epic saga of genius, persistence, ruthlessness, and deceit—is almost completely unknown.

Like Henry Ford and the Wright brothers, John Philip Holland was completely self-taught, a brilliant man raised in humble circumstances, earning his living as a schoolteacher and choirmaster. But all the while he was obsessed with creating a machine that could successfully cruise beneath the waves. His struggle to unlock the mystery behind controlled undersea navigation would take three decades, during which he endured skepticism, disappointment, and betrayal. But his indestructible belief in himself and his ideas led him to finally succeed where so many others had failed.

Going Deep is a vivid chronicle of the fierce battles not only under the water, but also in the back rooms of Wall Street and the committee rooms of Congress. A rousing adventure—surrounded by an atmosphere of corruption and greed—at its heart this a story of bravery, passion, and the unbreakable determination to succeed against long odds.

"A well-crafted combination of technology history, tortuous military politics, and the biography of a shamefully neglected American inventor."
— Kirkus Reviews

"In this delightful biography, John Holland, the little-remembered inventor of the military submarine, receives a well-deserved publicity boost from historian Goldstone. Goldstone revives the reputation of a great American inventor."
— Publishers Weekly

"Lawrence Goldstone has written a fascinating history of the development of the attack submarine, which is, up to today and far into the future, perhaps the most lethal naval weapon ever devised."
— Ray Mabus, 75th Secretary of the Navy

"An intriguing story not just of the technical advances in the submarine, but also of the machinations of Holland, his major competitor, Simon Lake, and the industrialists who backed them."
— Proceedings

"Goldstone paints a vivid portrait of two brilliant inventors. An enjoyable book for readers interested in innovations during the Gilded Age and the Progressive Era, along with military or American history."
— Library Journal

"Goldstone intends for his book to rescue Holland, whom he calls ‘the father of the modern submarine,’ from relative obscurity and place him alongside those other more well-known American inventors. His thorough and deeply researched book accomplishes exactly that, but it also tells the far larger history of the submarine’s long and difficult journey to reality. Going Deep rightly places Holland at the center of that history."
— The East Hampton Star

"With humor and grace, Lawrence Goldstone describes how entrepreneurs with new ideas (the submarine, in this case) struggled for recognition and acceptance among purblind government bureaucrats, ambitious politicians, and the conservative institution of the Navy. This is a well-crafted, highly readable account of the complexities, compromises, and nuanced relationships between the individuals, ideas, and institutions necessary for innovators to succeed."
— Justin L. C. Eldridge, Naval Historian

"A readable, compelling, and intriguing story of the development of the U.S. submarine industry at the turn of the 20th century."
— Joel I. Holwitt, "Execute Against Japan: The U.S. Decision to Conduct Unrestricted Submarine Warfare"

"We think of our times, as an unrivaled era of innovation but the Gilded Age at the turn the 20th Century was its equal. Lawrence Goldstone writes in brilliant fashion of this period and the cast of geniuses, tycoons, politicians and scoundrels that made it vibrate. Going Deep tells the story of an incredible invention, the attack submarine and the humble genius, John Philip Holland, who battled for decades to convince a skeptical world (and the Navy’s Old Guard) of the value of his creation. As told by Goldstone, Holland’s life soars with singular achievement and ends, as genius often does, in near obscurity. Goldstone has brought John Philip Holland back to the vital center of his times. An insightful, important and enthralling book. "
— Mark Obenhaus, Emmy-winning producer, "The Age of Aerospace"

"A detailed and thoroughly absorbing history of early submarine development.  Goldstone reveals the rivalry between two visionaries, John Holland and Simon Lake, and the surrounding intrigue in the competition to build submarines for the US Navy.  A fascinating read."
— Paul Varnadore, former US Submarine Commanding Officer