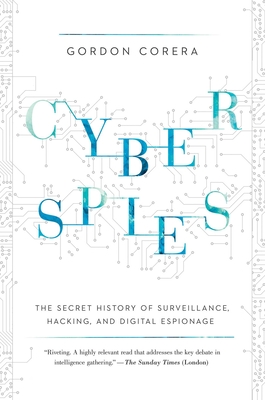 The Secret History of Surveillance, Hacking, and Digital Espionage

The previously untold—and previously highly classified—story of the conflux of espionage and technology, with a compelling narrative rich with astonishing revelations taking readers from World War II to the internet age.

As the digital era become increasingly pervasive, the intertwining forces of computers and espionage are reshaping the entire world; what was once the preserve of a few intelligence agencies now affects us all.

Corera’s compelling narrative takes us from the Second World War through the Cold War and the birth of the internet to the present era of hackers and surveillance. The book is rich with historical detail and characters, as well as astonishing revelations about espionage carried out in recent times by the UK, US, and China. Using unique access to the National Security Agency, GCHQ, Chinese officials, and senior executives from some of the most powerful global technology companies, Gordon Corera has gathered compelling stories from heads of state, hackers and spies of all stripes.

Cyberspies is a ground-breaking exploration of the new space in which the worlds of espionage, diplomacy, international business, science, and technology collide.

Praise For Cyberspies: The Secret History of Surveillance, Hacking, and Digital Espionage…

"An engrossing history of the dark side of the information revolution. Corera casts his net widely and makes it clear that America is the leader in the battle, as well as the most vulnerable. A convincing argument that the most secure way to communicate is via snail mail."
— Kirkus Reviews

"Riveting. Making use of excellent sources, Corera has produced a highly relevant read that addresses the key debate in intelligence gathering—the balance between privacy and security."
— The Sunday Times (London)

"Dense and comprehensive history of electronic and computer espionage includes many hitherto secret tales from the world of communication intelligence."
— Publishers Weekly

"A sweeping history of spying, surveillance and subversion in the digital world. Exhaustively reported and thoroughly annotated."
— Paste

"If you are looking for a clear and comprehensive guide to how communications have been intercepted, from cable-cutting in the First World War to bulk data collection exposed by Ed Snowden, this is it."
— The Guardian

"Corera’s illuminating summary of cyberespionage’s development and potential effects on modern statecraft, war, commerce, and everyday liberties will appeal to all readers interested in those topics."
— Library Journal

"An exhaustive account by the BBC's security correspondent."
— Providence Journal

"What good timing for this book. Gordon Corera’s book takes us through the labyrinth of cyber-espionage. It concerns a psychosis of control, whereby the digitization of spying infests every cranny of our lives."
— The Observer (London)

"A century-spanning history of cyberespionage and the tools that have made it possible. Touching on the NSA, encryption, Chinese censorship, and the emergence of sophisticated hackers, the book will pique readers interested in the geopolitical ramifications of surveillance and the complex relationship between security and privacy in our post-9/11, post-Snowden world."
— Booklist

"There are many stories densely packed throughout Cyberspies. The book successfully zig zags through different countries, laws, and politics while maintaining its central theme."
— PopMatters

Gordon Corera is a security correspondent for BBC News. In that role, he covers the work of Britain's intelligence agencies. His documentary series 'MI6: A century in the Shadows' was broadcast in the summer of 2009. His series 'The Real Spooks' on MI5 was broadcast in December 2007. He was educated at Oxford and Harvard Universities and joined the BBC in 1997.
Loading...
or
Not Currently Available for Direct Purchase