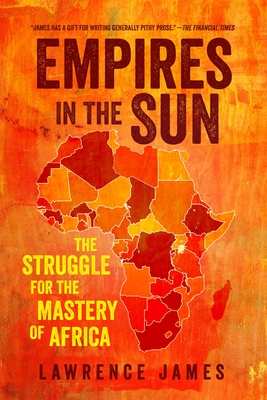 Empires in the Sun

The Struggle for the Mastery of Africa

The one hundred year history of how Europe coerced the African continent into its various empires—and the resulting story of how Africa succeeded in decolonization.

In this dramatic (and often tragic) story of an era that radically changed the course of world history, Lawrence James investigates how, within one hundred years, Europeans persuaded and coerced Africa into becoming a subordinate part of the modern world. His narrative is laced with the experiences of participants and onlookers and introduces the men and women who, for better or worse, stamped their wills on Africa. The continent was a magnet for the high-minded, the adventurous, the philanthropic, the unscrupulous. Visionary pro-consuls rubbed shoulders with missionaries, explorers, soldiers, big-game hunters, entrepreneurs, and physicians.

Between 1830 and 1945, Britain, France, Belgium, Germany, Portugal, Italy and the United States exported their languages, laws, culture, religions, scientific and technical knowledge and economic systems to Africa. The colonial powers imposed administrations designed to bring stability and peace to a continent that appeared to lack both. The justification for occupation was emancipation from slavery—and the common assumption that late nineteenth-century Europe was the summit of civilization.

By 1945 a transformed continent was preparing to take charge of its own affairs, a process of decolonization that took a quick twenty years. This magnificent history also pauses to ask: what did not happen and why?

Praise For Empires in the Sun: The Struggle for the Mastery of Africa…

"This is history written in the grand narrative style. James takes on a massive subject and addresses it in sweeping, muscular prose."
— Kirkus Reviews

"James’s book covers a vast amount of territory. This is a solid work with little in the way of fluff."
— Publishers Weekly

"James succeeds in concisely telling this history up until the end of apartheid and the fall of the Soviet Union. For all readers interested in a better understanding of modern Africa."
— Library Journal

"A superbly written history of the entire rise and fall of the European colonial empires on the Dark Continent, and a very well-illustrated one as well.  It comes at an opportune time.  A fine volume. Highly recommended."
— The Military Advisor

"A panoramic survey of imperial and then neo-colonial subjugation of the African continent between 1830 and 1990. A timely reminder of the devastating consequences of chauvinistic nationalism and expansionism. Remarkable."
— The Spectator

"A brisk, well-written and jaunty account of European empire-building in Africa. A timely reminder of the complexity of international politics, and the nuanced balance of forces that have shaped our modern world."
— The Times (UK)

One of our finest narrative historians, especially on imperial subjects, Lawrence James is the author of The Rise and Fall of the British Empire, Raj, and The Aristocrats. He lives near Oxford.
Loading...
or
Not Currently Available for Direct Purchase