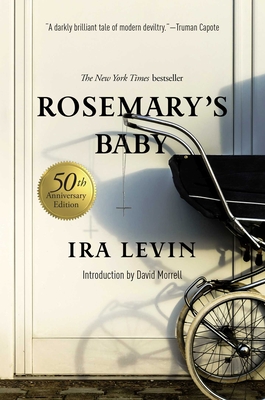 Rosemary Woodhouse and her struggling actor husband Guy move into the Bramford, an old New York City apartment building with an ominous reputation and mostly elderly residents. Neighbors Roman and Minnie Castavet soon come nosing around to welcome the Woodhouses to the building, and despite Rosemary's reservations about their eccentricity and the weird noises that she keeps hearing, her husband takes a shine to them. Shortly after Guy lands a plum Broadway role, Rosemary becomes pregnant—and the Castavets start taking a special interest in her welfare. As the sickened Rosemary becomes increasingly isolated, she begins to suspect that the Castavets' circle is not what it seems...

Suspense is beautifully intertwined with everyday incidents; the delicate line between belief and disbelief is faultlessly drawn.

A succession of solid and quite legitimate surprises. The suspense is admirably sustained.

A darkly brilliant tale of modern deviltry that induces the reader to believe the unbelievable. I believed it and was altogether enthralled.

Ira Levin is the author of The Boys from Brazil, Rosemary's Baby, Son of Rosemary, The Stepford Wives, This Perfect Day, Sliver, and A Kiss Before Dying (for which he won the Edgar Award). Levin was also the recipient of three Mystery Writers of America Edgar Allan Poe Awards. His website is iralevin.org.
Loading...
or support indie stores by buying on