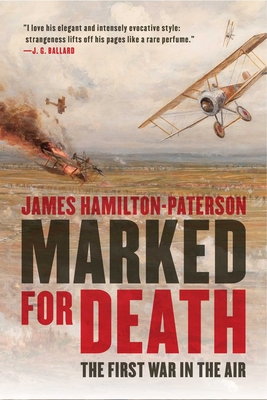 The romance of aviation had a remarkable grip on the public imagination, propaganda focusing on gallant air 'aces' who become national heroes. The reality was horribly different. Marked for Death debunks popular myth to explore the brutal truths of wartime aviation: of flimsy planes and unprotected pilots; of burning nineteen-year-olds falling screaming to their deaths; of pilots blinded by the entrails of their observers.

Marked for Death tells its inherently vivid story with more sheer comprehensive energy than any previous English-language history has ever done. Hamilton-Paterson’s book traces the rackety youth of human flight and its initially sloppy and largely undirected adaptation to the field of warfare, and his storytelling skills are on point and gratifyingly varied—there isn’t a dull page in this book.

The account is enlivened by quotes from pilots' journals and letters home. Best of all, the author—who has a solid body of fiction to his credit—is a consummate storyteller; not only does the book tell a fascinating story, it is nearly impossible to put down.

Penned by one of Britain’s most prolific and highly regarded authors, this book exhibits a clear, engaging prose so generously adorned with anecdotes and descriptive quotes that readers will want to keep on reading. This expertly written and nicely illustrated book is highly recommended.

A terrific story, which Hamilton-Paterson tells with tremendous relish, elegance, and attention to detail. An acclaimed poet and novelist, he is excellent at capturing the sheer courage of the pilots who ran risks that almost defy credibility.

Marked for Death is as interesting as it is scholarly. It is an authentic and comprehensive history of air war as well as the Royal Flying Corps and the Royal Air Force. Both experts and laypeople will find it highly readable.

James Hamilton-Paterson is the author of Empires of the Clouds, the classic account of the golden age of British aviation. He won a Whitbread Prize for his first novel, Gerontius. His most recent book was Marked for Death, a history of aerial combat during World War 1. He lives in Austria.
Loading...
or
Not Currently Available for Direct Purchase