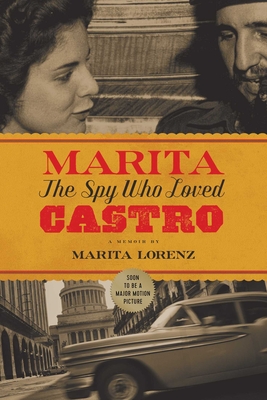 The Spy Who Loved Castro

The dramatic, glamorous story of lover-turned-spy Marita Lorenz and her affair with Fidel Castro, soon to be the subject of a major film starring Jennifer Lawrence.

Few people can say they’ve seen some of the most significant moments of the twentieth century unravel before their eyes. Marita Lorenz is one of them.

Born in Germany at the outbreak of WWII, Marita was incarcerated in a Nazi concentration camp as a child. In 1959, she travelled to Cuba where she met and fell in love with Fidel Castro. Yet upon fleeing to America, she was recruited by the CIA to assassinate the Fidel. Torn by love and loyalty, she couldn’t bring herself to slip him the lethal pills.

Her life would take many more twists and turns—including having a child with ex-dictator of Venezuela, Marcos Pérez Jiménez; testifying about the John F. Kennedy assassination; and becoming a party girl with close ties the New York mafia (and then a police informant).

Caught up in Cold War intrigue, espionage, and conspiracy—this is Marita’s incredible autobiography of a young woman who became a spy for the CIA.

Praise For Marita: The Spy Who Loved Castro…

"Marita Lorenz is the Forrest Gump of the Cold War. She was Fidel Castro’s lover and his would-be assassin. She was also seemingly involved in or present for almost every important geo-political event of that era: from the founding of communist Cuba to the Bay of Pigs invasion to the Kennedy assassination. By all accounts, she seems to be a woman attracted to danger. According to Lorenz: ‘One thing just led to another.’ Lorenz, who is now 78 and living in Brooklyn, has penned a book about her cloak-and-dagger life."
— New York Post

"Lorenz sure has a whopper of a tale."
— Library Journal

"Every event is like a tabloid headline in this engrossing memoir."
— Foreword Reviews

Marita Lorenz was born in Germany in 1939 and as a child, was interred in the Bergen-Belsen concentration camp. In the years that followed, she often sailed with her father (who was a ship captain) and, in 1959, she met Fidel Castro, with whom she fell in love. Later, the CIA would recruit and send her to assassinate Castro, an act she was unable to commit. She lives in Brooklyn, New York.
Loading...
or
Not Currently Available for Direct Purchase