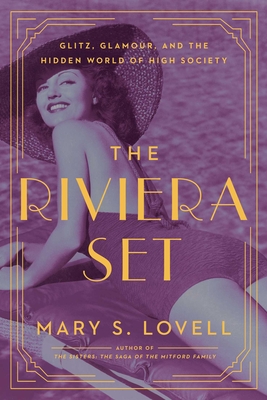 Glitz, Glamour, and the Hidden World of High Society

The author of the bestselling The Sisters: The Saga of the Mitford Family brings her trademark brio and relish to the charming and fascinating world of the Château de l'Horizon on the French Riviera.

The Riviera Set reveals the story of the group of people who lived, partied, bed-hopped and politicked at the Château de l'Horizon near Cannes, over the course of forty years from the time when Coco Chanel made southern French tans fashionable in the twenties to the death of the playboy Prince Aly Khan in 1960.

At the heart of dynamic group was the amazing Maxine Elliott, the daughter of a fisherman from Connecticut, who built the beautiful art deco Château and brought together the likes of Noel Coward, the Aga Khan, the Duke and Duchess of Windsor and two very saucy courtesans, Doris Castlerosse and Daisy Fellowes, who set out to be dangerous distractions to Winston Churchill as he worked on his journalism and biographies during his 'wilderness years' in the thirties. After the War the story continued as the Château changed hands and Prince Aly Khan used it to entertain the Hollywood set, as well as launch his seduction of and eventual marriage to Rita Hayworth

Bringing a bygone era back to life, Mary Lovell cements her spot as one of our top social historians in this captivating and evocative new book.

Praise For The Riviera Set: Glitz, Glamour, and the Hidden World of High Society…

"Perhaps there was something in what Ms. Lovell calls the ‘balmy air.’ Certainly, apart from Churchill, most of the guests at Château de l’Horizon seem to have been oblivious to what was taking place in other parts of Europe and that Hitler, named Chancellor in 1933, was gradually building up his forces. Ms. Lovell does hand out nuggets of fun gossip. Daisy Fellowes once attempted to seduce Churchill by getting him to come to her room. He found her ‘lying stark naked on a tiger skin.’ And declined. But the Riviera remains just as Somerset Maugham once famously called it, ‘a sunny place for shady people.'"
— The Wall Street Journal

"Ostensibly the biography of one mansion—the opulent Chateau de l’Horizon, near Cannes—in Lovell’s hands it becomes a history not just of this playground of the rich but of the changing currency of money, beauty, and fame."
— The New York Times Book Review

"Lovell presents a textured and meticulously researched history of a scintillating era on the Mediterranean coast."
— Publishers Weekly (starred)

"This work embodies a place with personality and panache. Lovell does a fine job in providing the gossip without salaciousness in this well-researched volume. Entertaining and well cited."
— Library Journal

"Lovell packs in as many celebrities as possible, which makes for an entertaining book."
— Kirkus Reviews

Mary Lovell is a fellow of the Royal Geographical Society. She is the author of eight previous biographies including the bestselling The Sisters: The Saga of the Mitford Family and The Churchills.
Loading...
or
Not Currently Available for Direct Purchase