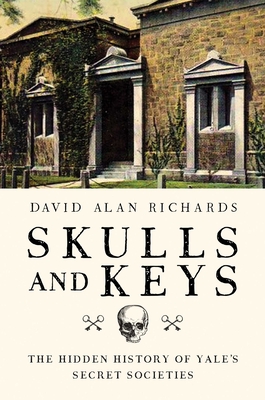 The mysterious, highly influential hidden world of Yale’s secret societies is revealed in a definitive and scholarly history.

Secret societies have fundamentally shaped America’s cultural and political landscapes. In ways that are expected but never explicit, the bonds made through the most elite of secret societies have won members Pulitzer Prizes, governorships, and even presidencies. At the apex of these institutions stands Yale University and its rumored twenty-six secret societies. Tracing a history that has intrigued and enthralled for centuries, alluring the attention of such luminaries as Ernest Hemingway, William Faulkner and F. Scott Fitzgerald, Skulls and Keys traces the history of Yale’s societies as they set the foundation for America’s future secret clubs and helped define the modern age of politics.

But there is a progressive side to Yale’s secret societies that we rarely hear about, one that, in the cultural tumult of the nineteen-sixties, resulted in the election of people of color, women, and gay men, even in proportions beyond their percentages in the class. It’s a side that is often overlooked in favor of sensational legends of blood oaths and toe-curling conspiracies. Dave Richards, an alum of Yale, sheds some light on the lesser known stories of Yale’s secret societies. He takes us through the history from Phi Beta Kappa in the American Revolution (originally a social and drinking society) through Skull and Bones and its rivals in the nineteenth and twentieth centuries. While there have been articles and books on some of those societies, there has never been a scholarly history of the system as a whole.

Praise For Skulls and Keys…

"Full of intriguing revelations and even a little skulduggery."
— Kirkus Reviews

"Given the secrecy of secret societies, we may never uncover all there is to know, but with Skull and Keys, David Richards comes as close as possible to giving us full and rich pictures of Yale’s distinctive and peculiar institutions. Those interested in Final Clubs at Harvard and Eating Clubs at Princeton will find much to ponder comparatively. And those interested in the history of Yale, of elites, of higher education, and of America over the course of two centuries will learn much from Richards’ prodigiously researched, engaging, and thoughtful book. They will find out about the history of collegiate rituals, changing patterns of American elitism, the connections between the local and the national—including how the welcomed and increased diversity of undergraduates in New Haven collided with traditional and often entrenched institutions and practices."
— Daniel Horowitz, Yale 1960, professor emeritus of History at Smith College, and author of "On the Cusp: The Yale College Class of 1960 and the World on the Verge of Change"

"In his book, Richards, a member of Skull and Bones, crafts an extensive historical narrative about the place of secret societies son Yale’s campus and within the American public imagination."
— Yale News

"History illuminates the past and guides us in the future. Yale’s secret societies have been mysterious, misunderstood, and maligned. In the context of Yale history, David Richards has done a superb job of exploring and explaining these unique institutions. This book will inform the reader and help open a new, intelligent discussion about higher education and leadership."
— Henry Chauncey, Jr., Secretary and Director of Admissions, Yale University

With both undergrad and law degrees from Yale University, David Alan Richards was tasked by Yale President Kingman Brewster to write a history of the Yale Corporation to undergird that board’s expansion in the nineteen-sixties to include previously-excluded women and ethnic and religious minorities. His Rudyard Kipling: A Bibliography, co-published in 2010 by the British Library and Oak Knoll Press, was nominated for the bibliography prize of the International League of Antiquarian Booksellers. Earlier works include co-editing Kipling and His First Publisher (Rivendale Press: 2001) and authoring Rudyard Kipling: The Books I Leave Behind (Yale University Press: 2007). Residing in Scarsdale, New York, he is Senior Counsel with Steptoe & Johnson LLP. He is a longtime officer of New York City's Grolier Club and serves as secretary of the St. Bartholomew's Conservancy and on the legal committee of the Yale Club of New York City.
Loading...
or
Not Currently Available for Direct Purchase