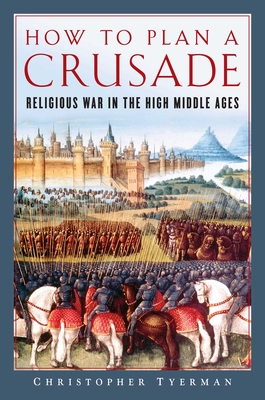 How to Plan a Crusade

A spirited and sweeping account of how the crusades really worked—and a revolutionary attempt to rethink how we understand the Middle Ages.

The story of the wars and conquests initiated by the First Crusade and its successors is itself so compelling that most accounts move quickly from describing the Pope's calls to arms to the battlefield. In this highly original and enjoyable new book, Christopher Tyerman focuses on something obvious but overlooked: the massive, all-encompassing and hugely costly business of actually preparing a crusade. The efforts of many thousands of men and women, who left their lands and families in Western Europe, and marched off to a highly uncertain future in the Holy Land and elsewhere have never been sufficiently understood. Their actions raise a host of compelling questions about the nature of medieval society.

How to Plan a Crusade is remarkably illuminating on the diplomacy, communications, propaganda, use of mass media, medical care, equipment, voyages, money, weapons, wills, ransoms, animals, and the power of prayer during this dynamic era. It brings to life an extraordinary period of history in a new and surprising way.

Praise For How to Plan a Crusade: Religious War in the High Middle Ages…

"A quirky niche book that descends into obscure, even humdrum areas and makes them interesting. In the right hands, such a book can be a pleasure. This is the case with How to Plan a Crusade."
— The New York Times Book Review

"By concentrating on the ‘prosaic methods’ of crusading rather than on the drama of the campaigns, as historians have traditionally done, Crusades expert Tyerman manages to demythologize the process. Tyerman provides a compelling, vivid sense of a lively, pragmatic, driven, and highly organized society. A fresh way to envision the Medieval era."
— Kirkus Reviews

"His deeply researched study is dedicated to exploring the relationship between human reason and religious war in all its aspects—justification, propaganda, recruitment, finance, logistics—to show us how 'reason made religious war possible.'"
— The London Review of Books

"Serious and scholarly, the synthesis of decades of work on difficult, fragmented sources. An impressive and lively book, laced with wry asides and enough surprising details to pique the general reader."
— Jessie Childs, The Guardian

"Tyerman explores the role of reason in medieval wars in this must-read book for history buffs."
— NBC-2

"Mining details on logistics 800 years ago is Tyerman's forte, and he throws them on to the page like chaff from a trebuchet. It is comprehensive, laying down a great skein of fact where there was only supposition (much of it false). And, as the West gears up for the crusade against Islamic State, it is horribly timely."
— The Times (London)

"An impressive synthesis of a complicated subject, presented in elegant, readable prose. Not many historians could have done it."
— The Spectator (UK)

"Fascinating not just for what it has to tell us about the Crusades, but for the mirror it holds up to today's religious extremism."
— Tom Holland, The Mail on Sunday (UK)

"A real achievement. Tyerman is a virtuoso with the English language. Filled to the brim with rich descriptions of the intricate planning and preparations that Europeans conducted before their Crusades. There are few scholars today who could match [Tyerman’s] breadth of knowledge regarding the Crusades. Tyerman energetically (and rightly) argues that medieval people were just as rational as modern people."
— The New Criterion

Christopher Tyerman is Professor of the History of the Crusades at the University of Oxford; Fellow and Tutor in History at Hertford College, Oxford; and Lecturer in Medieval History at New College, Oxford. He has written extensively on the crusades in British publishing, most recently God's War: A New History of the Crusades and The Debate on the Crusades. He is also the editor of the Penguin Classics edition of the Chronicles of the First Crusade.
Loading...
or
Not Currently Available for Direct Purchase