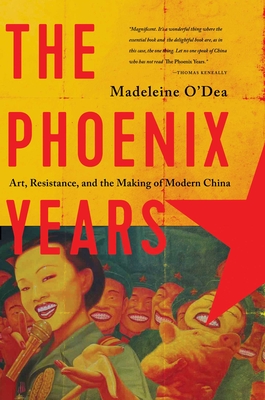 At once a fascinating account of the birth of modern China and a moving chronicle of courage, creativity, and resistance.

The riveting story of China's rise from economic ruin to global giant in the past four decades is illuminated by another, equally fascinating, narrative beneath its surface—the story of the country's emerging artistic avant-garde and the Chinese people's ongoing struggle for freedom of expression.

By following the stories of nine contemporary Chinese artists, The Phoenix Years shows how China's rise unleashed creativity, thwarted hopes, and sparked tensions between the individual and the state that continue to this day. It relates the heady years of hope and creativity in the 1980s, which ended in the disaster of the Tiananmen Square massacre. Following that tragedy comes China's meteoric economic rise, and the opportunities that emerged alongside the difficult compromises artists and others have to make to be citizens in modern China.

Foreign correspondent Madeleine O'Dea has been an eyewitness for over thirty years to the rise of China, the explosion of its contemporary art and cultural scene, and the long, ongoing struggle for free expression. The stories of these artists and their art mirror the history of their country. The Phoenix Years is vital reading for anyone interested in China today.

Praise For The Phoenix Years…

"Amidst all the chatter about China lies this rock of a book, a magnificent memoir and history from the very core of modern Chinese society. It's a wonderful thing where the essential book and the delightful book are, as in this case, the same thing. Let no one speak of China who has not read The Phoenix Years."
— Thomas Keneally, author of Schindler's List

"A well-grounded survey of the incredible courage of Chinese artists since the first flowering of the late 1970s and subsequent crackdowns. An illuminating chronicle of several generations of resilient and beleaguered Chinese artists, with minibiographies, a helpful timeline, and extensive notes."
— Kirkus Reviews

"[O’Dea] makes geopolitical history accessible and engaging through the lives and experiences of such individual artists as Huang Rui and Guo Jian. O’Dea writes for readers new to art, offering straightforward descriptions of individual works, and new to Chinese history, explaining the nuts and bolts of crucial policies and protests. By focusing on how individuals experienced communism and resisted it, O’Dea succeeds in making history human."
— Booklist

"The Phoenix Years is an essential background history of modern China. O’Dea captures the intellectual excitement of the bohemians of modern China while enriching her own understanding of Chinese history."
— Shelf Awareness (starred)

"Beautifully crafted and immensely readable. Required reading for all those who seek to understand how China has stumbled repressively through the past 40 years and how its finest citizens have persisted in trying to imagine a better, freer China. O’Dea does not put a foot wrong. The soul of the book, however, breathes in her account of the lives and artistic endeavors of a range of people."
— The Australian

"O’Dea has done a great service by bringing together the disparate stories of her artists and showing how their creativity has been a constant struggle against regime repression. Their vision for China’s future should be ours."
— Paul Monk, author of Thunder from the Silent Zone: Rethinking China

Madeleine O'Dea is a writer and journalist who has been covering the political, economic and cultural life of China for the past three decades. She first went to Beijing in 1986 as the correspondent for the Australian Financial Review newspaper, and covered China through the 1990s as a producer with ABC Television. She was the founding editor-in-chief of Artinfo China and the Asia correspondent for Art + Auction and Modern Painters magazines. She has written for a range of other publications including Guardian, The Art Newspaper, Bazaar Art, Sydney Morning Herald and the Age, the Toronto Globe and Mail, and The Australian.
Loading...
or
Not Currently Available for Direct Purchase