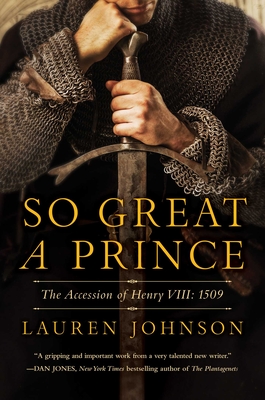 A vivid and original portrait of the year the young Henry VIII assumes the throne, revealing a kingdom at a crossroads between two dynamic monarchs and two ages of history.

England, 1509. Henry VII, the first Tudor monarch, is dead; his successor, the seventeen-year-old Henry VIII, offers hope of renewal and reconciliation after the corruption and repression of the last years of his father's reign.

The kingdom Henry inherits is not the familiar Tudor England of Protestantism and playwrights. It is still more than two decades away from the English Reformation, and ancient traditions persist: boy bishops, pilgrimages, Corpus Christi pageants, the jewel-decked shrine at Canterbury. So Great a Prince offers a fascinating portrait of a country at a crossroads between two powerful monarchs and between the worlds of the late Middle Ages and the Renaissance.

Historian Lauren Johnson tells the story of 1509 not just from the perspective of the young king and his court, but from the point of view of merchants, ploughmen, apprentices, laundresses, and foreign workers. She looks at these early Tudor lives through the rhythms of annual rituals, juxtaposing political events in Westminster and the palaces of southeast England with the religious, agrarian, and social events that punctuated the lives of the people of young Henry VIII's England.

"An excellent, immersive description of 1509, the first year of Henry VIII’s kingship. A treat for anyone interested in Tudor daily life. Those wishing for more detail on the court of Henry VIII could read this work alongside the titles of Alison Weir to great advantage."
— Library Journal

"The political narrative is crisp. An assured an eye-opening introduction to the England of 1509."
— The Times Literary Supplement (U.K.)

"Johnson looks back at the early years of the infamously much-married, red-faced king, successfully revealing an intelligent, determined teenager. Capturing both the excitement and banalities of daily life from each economic class, Johnson recreates the rhythms of the Tudor era only two decades before Henry himself created seismic shifts that affected all of his subjects."
— Publishers Weekly

"Lauren Johnson is a terrific guide to a country on the brink of profound and permanent change, connecting everyday life with the thrust of great political events. This is a gripping and important work from a talented new writer."
— Dan Jones, author of The Plantagenets

"It is refreshing to read a book that not only focuses on the upper echelons of society but also goes to lengths to describe the lives of 'ordinary' people. Johnson's authoritative tone and passion for the subject made for a very enjoyable read."
— History of Royals (U.K.)