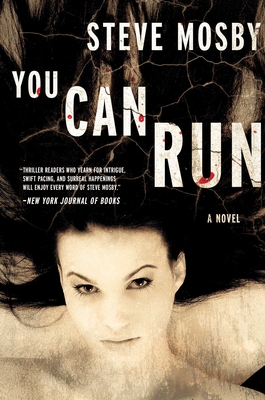 When a car crashes into a garage on an ordinary street, the attending officer is shocked to look inside the damaged building and discover a woman imprisoned within. As the remains of several other victims are found in the attached house, police believe they have finally identified the Red River Killer—a man who has been abducting women for nearly twenty years and taunting the police with notes about his crimes. But now the main suspect, John Blythe, is on the run.

As the manhunt for Blythe intensifies, Detective Inspector Will Turner finds himself fighting to stay involved in the investigation. The Red River killings hold a personal significance to him and he must be the one to find the killer, although he's determined to keep this from his fellow officers at all costs.

Praise For You Can Run: A Novel…

"This fusion of mystery, police procedural, and noir thriller from CWA Dagger Award–winner Mosby is pure crime fiction gold. The narrative is powered by darkly lyrical prose and a cast of nuanced characters, but it’s the bombshell plot twists at novel’s end that will leave readers more than satisfied. This is one of those exceedingly rare novels that’s virtually impossible to put down."
— Publishers Weekly (starred and boxed review)

"A riddle wrapped in a mystery inside an enigma guaranteed to play havoc with both your brain cells and your heartbeat."
— Kirkus Reviews (starred)

"One of a handful of writers who make me excited about crime fiction."
— Val McDermid [Praise for Steve Mosby]

"Mosby is breaking the mold. Add doses of introspection, and one has a novel that mystifies while it spooks. A thoughtful entertainment, ideal for readers seeking the offbeat"
— Booklist