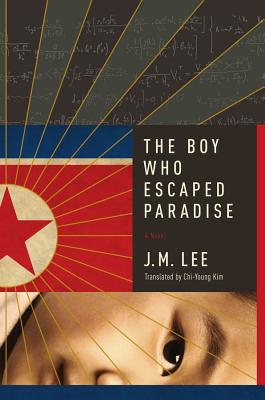 The Boy Who Escaped Paradise

An astonishing story of the mysteries, truths, and deceptions that follow the odyssey of Ahn Gil­mo, a young math savant, as he escapes from the most isolated country in the world and searches for the only family he has left

An unidentified body is discovered in New York City, with numbers and symbols are written in blood near the corpse. Gil­mo, a North Korean national who interprets the world through numbers, formulas, and mathematical theories, is arrested on the spot. Angela, a CIA operative, is assigned to gain his trust and access his unique thought-process.

The enigmatic Gil­mo used to have a quiet life back in Pyongyang. But when his father, a preeminent doctor is discovered to be a secret Christian, he is subsequently incarcerated along with Gilmo, in a political prison overseen by a harsh, cruel warden.

There, Gilmo meets the spirited Yeong-ae, who becomes his only friend. When Yeong-­ae manages to escape, Gil­mo flees to track her down. He uses his peculiar gifts to navigate betrayal and the criminal underworld of east Asia—a world wholly alien to everything he's ever known.

In The Boy Who Escaped Paradise, celebrated author J. M. Lee delves into a hidden world filled with vivid characters trapped by ideology, greed, and despair. Gil­mo's saga forces the reader to question the line between good and evil, truth and falsehood, captivity and freedom.


Praise For The Boy Who Escaped Paradise: A Novel…

Channeling timeless quests from The Odyssey on, while highly reminiscent of the contemporary cult classic Vikas Swarup’s Q&A (the literary inspiration for celluloid sensation “Slumdog Millionaire”), Lee’s latest should guarantee exponential growth among savvy Western audiences searching for a universal story with global connections. In a phrase, read this.


A haunting journey through the eyes of a young man with Asperger syndrome. Lee’s novel touches on the literary need for character-driven stories that move beyond the strangeness and horror of life under the North Korean state. This, along with its thriller-like pace, make The Boy Who Escaped Paradise worth a read.


Lee creates a dignified and moving portrait of North Koreans’ struggle for freedom at home and abroad, and intertwines it with a rogue genius adventure—all without sacrificing the appeal of either plot line. Another outstanding thriller from Lee (after The Investigation, 2015), whose novels have garnered massive acclaim in Korea.

A North Korean whiz kid tries for a slice of the happiness pie, and complications ensue.

A reminder of the power of numbers, but one doesn't need to be a math fan to appreciate the brilliance of this work. The language is mesmerizing. An exciting adventure added to rich characters, all multiplied by stunning language, equals an unforgettable novel.

J. M. Lee has sold hundreds of thousands of books in his native Korea. One, Deep Rooted Tree, was made into a popular T.V. series. He is the author of The Investigation, also published by Pegasus Books.

Chi-Young Kim is the celebrated translator of the Man Asian Literary Prize-winning international bestseller Please Look After Mom.
Loading...
or support indie stores by buying on