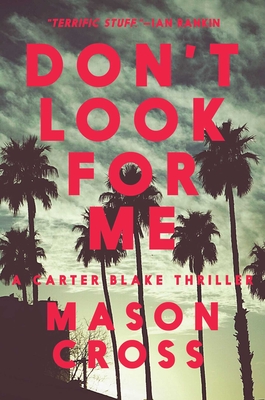 Don't Look for Me

A nail-biting new thriller—perfect for fans of Jack Reacher, Alex Cross, and Jason Bourne—about the desperate hunt for a woman who has a secret to kill for . . .

Six years ago, the woman Carter Blake loved disappeared and told him not to ever look for her. For six long years, he kept that promise. She was a woman on the run—a woman with a secret many would kill for. It was better that she stay hidden.

But now someone else is looking for her. Trenton Gage is a hitman with a talent for finding people—dead or alive. And his next job is to track down the woman Carter Blake once loved, a woman on the run. With both men hunting the same person, the question is: Who will find her first?

"The writing is taut, and the pace is unrelenting. With few pauses for reflection and plenty of heart-pounding, visceral action, this one immediately calls to mind Lee Child."
— Booklist

"If you like page-whirring thrillers centered on an enigmatic, action-oriented central character, then you definitely want to give the Carter Blake books a try. Cross delivers a ripsnorter of a thriller. Plenty of suspense, violent action, tension, and twists blend into a propulsive narrative. A one-sitting read that keeps the revs high, while delivering some nice shading in terms of character and setting, Don’t Look for Me will leave readers wanting more Carter Blake."
— Mystery Scene Magazine

"A fast-paced action-packed thriller that will keep you on the edge of your seat until the very end. Cross is remarkable in creating this unique story with many twists and turns with some unexpected reveals and truths along the way."
— Fresh Fiction

"Even jaded genre readers will be absorbed by Cross's second thriller featuring manhunter Carter Blake.  Cross makes the most alternating perspectives, building up to a logical but surprising climax."
— Publishers Weekly [Praise for the Carter Blake series]

"Fans of Jeffrey Deaver should be enthralled."
— Kirkus Reviews [Praise for the Carter Blake series]

"Pulse-pounding. Mason Cross deftly combines an adrenaline rush plot with one of the best new series characters since Jack Reacher.  Prepare to read all night."
— Lisa Gardner [Praise for the Carter Blake series]

"Another swift-moving thriller in the Jason Bourne and Jack Reacher express lane.  And if you like competent reads that don't slow down for a minute, it's your kind of book too."
— Criminal Element [Praise for the Carter Blake series]