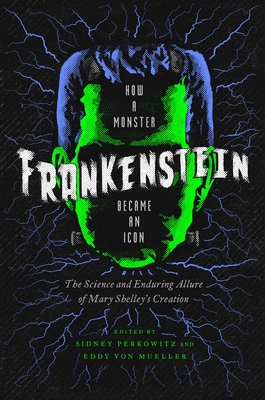 How A Monster Became an Icon: The Science and Enduring Allure of Mary Shelley's Creation

Few creations have risen from literary origins to reach world-wide importance like Frankenstein.  This landmark volume celebrates the bicentenary of Mary Shelley's creation and its indelible impact on art and culture.

The tale of a tormented creature created in a laboratory began on a rainy night in 1816 in the imagination of a nineteen-year-old Mary Wollstonecraft Shelley, newly married to the celebrated Romantic poet Percy Shelley. Since its publication two years later, in 1818, Frankenstein: Or, the Modern Prometheus has spread around the globe through every possible medium and variation. Frankenstein has not been out of print once in 200 years.  It has appeared in hundreds of editions, perhaps more than any other novel. It has inspired a multitude of stage and screen adaptations, the latest appearing just last year. “Frankenstein” has become an indelible part of popular culture, and is shorthand for anything bizarre and human-made; for instance, genetically modified crops are “Frankenfood.”

Conversely, Frankenstein’s monster has also become a benign Halloween favorite. Yet for all its long history, Frankenstein's central premise—that science, not magic or God, can create a living being, and thus these creators must answer for their actions as humans, not Gods—is most relevant today as scientists approach creating synthetic life.

In its popular and cultural weight and its expression of the ethical issues raised by the advance of science, physicist Sidney Perkowitz and film expert Eddy von Muller have brought together scholars and scientists, artists and directions—including Mel Brooks—to celebrate and examine Mary Shelley’s marvelous creation and its legacy as the monster moves into his next century.

Praise For Frankenstein: How A Monster Became an Icon: The Science and Enduring Allure of Mary Shelley's Creation…

"Those seeking to delve further will find intelligent essays on the novel’s origins, appropriations and scientific relevance in Frankenstein: How a Monster Became an Icon, edited by physicist Sidney Perkowitz and filmmaker Eddy von Mueller. Bringing together the 'two cultures' of art and science just as Shelley did in her novel, this collection also provides insights into this modern myth by those who have contributed to its expansion."
— Wall Street Journal

"The legacy of Mary Shelley’s Frankenstein is celebrated in this respectful anthology. A fine case for the enduring value of Shelley’s timeless tale."
— Publishers Weekly

"Very enjoyable. Readers fond of Shelley’s original work, as well as those who enjoy consuming the culture it’s spawned and influenced, will find this a book to savor, and despite edited compilations not being the usual choice for book groups, this could be a stellar choice for any pop-culture savvy group that’s recently worked with Shelley’s title. Recommended."
— Library Journal

"For all the historical specificity of these references, the novel’s qualms about the underside of progress have never resonated more than in the 21st century. The issues raised by artificial life are no longer hypothetical. Genetic modification and robotics have made them urgent. Those analogies are delineated in Frankenstein: How a Monster Became an Icon. It includes a useful summary of current attitudes among scientists to techniques commonly known as ‘playing God."
— The Economist

Sidney Perkowitz is a professor emeritus at Emory University. He is the author of Empire of Light and Universal Foam and has written for The Los Angeles Times, The Washington Post, Discover, Physics World, Aeon and more. He lives in Atlanta, Georgia.

Eddy Von Mueller is a scholar, filmmaker and educator in Atlanta, Georgia. He has published on subjects ranging from silent adaptations of Shakespeare to the nature films produced by the Walt Disney Company, and his most recent feature film, "The Lady From Sockholm," played over thirty film festivals around the world.
Loading...
or
Not Currently Available for Direct Purchase