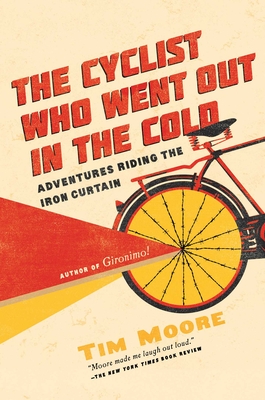 Not content with tackling the Italian Alps or the route of the Tour de France, Tim Moore sets out to scale a new peak of rash over-ambition: the 6,000-mile route of the old Iron Curtain on a tiny-wheeled, two-geared East German shopping bike. Moore sets off from the northernmost Norwegian-Russian border at the Arctic winter’s brutal height, bullying his plucky MIFA 900 through the endless sub-zero desolation of snowbound Finland. Sleeping in bank vaults, imperial palaces and unreconstructed Soviet youth hostels, battling vodka-breathed Russian hostility, Romanian landslides, and a diet of dumplings, Moore and his ‘so-small bicycle’ are sustained by the kindness of reindeer farmers and Serbian rock gods, plus a shameful addiction to Magic Man energy drink. Haunted throughout by the border detritus of watchtowers and rusted razor wire, Moore reflects on the curdling of the Communist dream, and the memories of a Cold War generation reared on the fear of apocalypse—at a time of renewed East-West tension. After three months, twenty countries and a fifty-eight degree jaunt up the thermostat, man and bike finally wobble up to a Black Sea beach in Bulgaria, older and wiser, but mainly older.

Praise For The Cyclist Who Went Out in the Cold…

Engaging and elucidating. An enjoyable account of an amazing human accomplishment.

Moore is a quick and keen observer. His wit is a consistent pleasure. And this ‘in the cold’ travelogue is an extraordinarily audacious and absorbing venture.

Moore undertakes a quixotic 20-country adventure on a two-wheeled Rocinante—an East German–era shopper bike that proves a capable and symbolic partner for personal and political discovery. A bittersweet memoir.

The Cyclist Who Went Out in the Cold is not for bike geeks alone. It stuffs your panniers with just the right wodges of political history (keep a British-slang dictionary nearby to fully appreciate the book) and makes you cheer the invention of armchair travel. This cyclist may have gone out in the cold, but his book is just the thing to stay indoors with this winter.


After three months and a close-up look at some 20 countries, Moore has a very funny and poignant story to tell. Vivid and fresh.

The bike provides a unique vehicle (and perfect pace) for more intimate travel. It also unearths circumstances uncommon to other modes of transportation yet ideal for connecting with locals. A warmly recommended tour that touches on travel, history, and cycling.

Moore outdid himself in his latest adventure.

You don't have to be into cycling to reap the benefits of Gironimo! An entertaining and jauntily written travelogue that made me laugh out loud. With Moore as your guide, you may want to hurry over to Italy on the next flight out.

Something in the clicking turns of the wheels begins to pull you along. You find yourself grinning with Moore in sheepish recognition of the idiocy of what he’s doing, waving with him at the bemused/befuddled/belligerent reactions of passing motorists and head-shaking townfolk alike. It becomes, for sure, one weirdly captivating ride.

Tim Moore's writing has appeared in the Daily Telegraph, the Observer, The Sunday Times and Esquire. He is the author of French Revolutions and four other books. He lives in London.
Loading...
or support indie stores by buying on