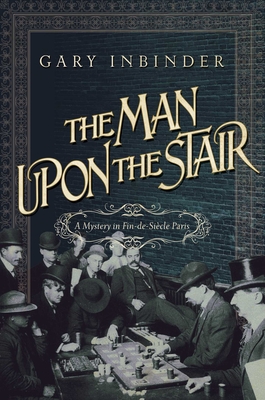 The Man Upon the Stair

Chief Inspector Achille Lefebvre returns from a much-needed vacation to find that there are assassins on his tail, and, as if that weren’t enough, one of France’s wealthiest men has gone missing without a trace…

In The Man Upon the Stair, Gary Inbinder’s brilliant detective Achille Lefebvre returns to solve the mystery of a disappeared millionaire in the sensational, atmospheric world of fin-de-siècle Paris.

At the public execution of the anarchist assassin Laurent Moreau, the outgoing Chief Inspector warns his protégé, the newly promoted Lefebvre: “I’ve heard that some of Moreau’s cronies have sworn revenge. You don’t want to get killed your first week as chief.”

Meanwhile, Lefebvre is charged with investigating the disappearance of the Baron de Livet, a brash millionaire with connections to Russian spies and a history of gambling, womanizing, and fighting in duels. The case is more complicated than it seems, of course, and Lefebvre and his team must make sense of a poisoned maid, an unidentifiable stage coach, and a missing briefcase full of cash. The Baron’s connection to the world of international espionage means that if the Inspector isn’t fast enough, the Baron’s disappearance might trigger a war.

And Lefebvre mustn’t forget those stalking anarchists who are out for his blood, as he searches for the man who wasn’t there…

Praise For The Man Upon the Stair: A Mystery in Fin de Siecle Paris (Achille Lefebvre Mysteries)…

"A dizzying number of details recreate the nineteenth-century Paris of artists, prostitutes, aristocrats, gamblers, and spies. Achille continues to endear, with his mashed flowers and good heart, much like Louise Penny’s Armand Gamache."
— Booklist

"The third of Inbinder’s lush, leisurely period procedurals favors the journey over the destination, with back stories and period touches in nearly every chapter."
— Kirkus Reviews

"A densely written mystery with a surprise ending that, in addition to an intricate criminal investigation, provides the reader with a real feel for what it was like socially and politically to live in that time and place."
— Mystery Scene Magazine

"A wonderfully atmospheric novel with "purplish cloud cover," figures hiding in the shadows of doorways, gaslights, and the sound of cartwheels and horses’ hooves on the cobblestone streets. Inbinder has created a convincing and intriguing mystery reminiscent of Parisian literature at the turn of the 20th century, when detective work was vastly different than it is today with the benefits of advanced technology."
— Historical Novels Review

"Inbinder's tale is an enjoyable romp through a vibrant time in history with great artists, Can Can dangers, and underworld mobsters set against a pleasingly tawdry Parisian backdrop."
— The Cleveland Plain Dealer (Praise for the Achille Lefebvre series)

"Inbinder weaves a wonderful tale and his plotting and pacing are right on the money. "
— Crimespree Magazine (Praise for the Achille Lefebvre series)

Gary Inbinder's fiction, articles, and essays have appeared in Bewildering Stories, Halfway Down the Stairs, The Absent Willow Review, Morpheus Tales, Litsnack, Touchstone Magazine, and other publications. He is a member of both the Historical Novel Society and the Bewildering Stories Editorial Review Board. He lives in California.
Loading...
or
Not Currently Available for Direct Purchase