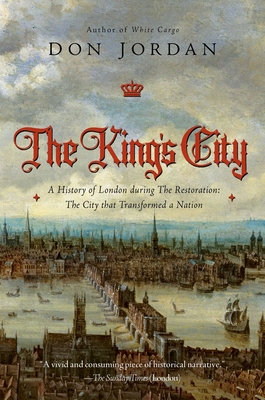 A History of London During The Restoration: The City that Transformed a Nation

A tantalizing and thrilling history of London at the time of King Charles II, from the acclaimed co-author of The King's Revenge and The King's Bed.

During the reign of Charles II, London was a city in flux. After years of civil war and political turmoil, England's capital became the center for major advances in the sciences, the theatre, architecture, trade and ship-building that paved the way for the creation of the British Empire.

At the heart of this activity was the King, whose return to power from exile in 1660 lit the fuse for an explosion in activity in all spheres of city life. London flourished, its wealth, vibrancy and success due to many figures famous today including Christopher Wren, Samuel Pepys, and John Dryden — and others whom history has overlooked until now.

Throughout the quarter-century Charles was on the throne, London suffered several serious reverses: the plague in 1665 and the Great Fire in 1666, and severe defeat in the Second Anglo-Dutch War, which brought about notable economic decline. But thanks to the genius and resilience of the people of London, and the occasionally wavering stewardship of the King, the city rose from the ashes to become the economic capital of Europe.

The King's City tells the gripping story of a city that defined a nation and birthed modern Britain — and how the vision of great individuals helped to build the richly diverse place we know today.

Praise For The King's City: A History of London During The Restoration: The City that Transformed a Nation…

"Post-Cromwellian London bursts to life with the Stuart dynasty’s restoration in this effortless account from Jordan that covers the years 1660–1685. A fresh perspective and enthusiasm for the era’s events and London’s adaptable residents."
— Publishers Weekly

"A wonderful picture of 17th-century England, replete with the excitement of ideas and discoveries and the beginnings of the empire."
— Kirkus Reviews

"Jordan crafts a compelling narrative that provides an in-depth look at the personalities and events that shaped England’s Restoration. Recommended for readers interested in British and royal history, as well as fans of historical fiction."
— Library Journal

"A fast-paced, lively work."
— BBC History Magazine (Praise for THE KING'S REVENGE and THE KING'S BED)

"A marvelous blend of scholarship and accessibility. The most readable and stimulating study of the time since Jenny Uglow's A Gambling Man."
— Open Letters Review

"An absorbing history packed with more plotting than an episode of The Borgias."
— Booklist (Praise for Don Jordan)

Don Jordan has twice won a Blue Ribbon Award at the New York Film and Television Festival and has written four books with Michael Walsh. He lives in London.
Loading...
or
Not Currently Available for Direct Purchase