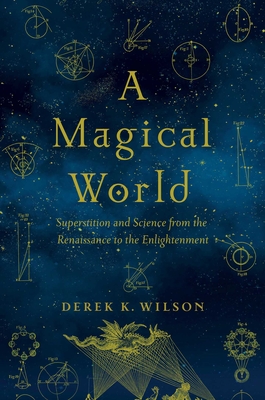 Superstition and Science from the Renaissance to the Enlightenment

A rich and multi-faceted history of heroes and villains interwoven with the profound changes in human knowledge that took place between the Renaissance and the Enlightenment.

Spanning some of the most vibrant and fascinating eras in European history, Cambridge historian Derek Wilson reveals a society filled with an ardent desire for knowledge and astounding discoveries—and the fantastic discoveries that flowered from it. There was the discovery of the movement of blood around the body; the movement of the earth around the sun; the velocity of falling objects (and why those objects fell).

But these these thinkers were steeped in—and drew from—intellectual traditions that might surprise us.  There was folk religion, which in its turn had deep roots in a pagan past. Others referred to spirits or tapped into stores of ancient wisdom and herbal remedies. This was the world of wise women, witches, necromancers, potions and incantations.

Even the mighty Catholic Church, which permeated all elements of life, had its own "magical" traditions. Devote believers and accomplished scientists alike both pursued alchemy. Astrology, also a rapidly developing field, was based on the belief that human affairs were controlled by the movement of heavenly bodies. Casting horoscopes was a near-universal practice, from the papacy to the peasantry. Yet from this heady cultural mix, the scientific method would spring.

But it was not just Europe where this tidal wave of intellectual innovation was colliding with folk wisdom to create something new.  The twelfth-century Islamic polymath, Averroes, has been called 'the father of secular thought' because of his landmark treatises on astronomy, physics and medicine. Jewish scholars melded mysticism to create the esoteric disciplines of the Kabbalah.

By the mid-seventeenth century, "science mania" was in full flower. In 1663, The Royal Society in London received its charter. Just three years later, the French Academy of Sciences was founded, and other European capitals rapidly followed suit. In 1725, the word "science" was at last defined as "a branch of study concerned either with a connected body of demonstrated truths or with observed facts systematically classified." Yet just nine years before, the last witch had been executed in Britain.  Fascinating and thought-provoking, A Magical World  is a reminder of humanity's paradoxical nature—our passionate pursuit of knowledge alongside deep-rooted fears, superstitions, and traditions.

Praise For A Magical World: Superstition and Science from the Renaissance to the Enlightenment…

"A good introduction to a significant historical period and encouragement for those with a great idea to continue seeking acceptance."
— Kirkus Reviews

"Wilson ably posits that most intellectuals sought a middle way between extreme rationalism and radical religious thought, and in their embrace of both religion and science contributed invaluably to a search for understanding that continues to this day. Highly recommended for readers interested in scientific or European history."
— Library Journal

"Masterful and lively.  Wilson writes with great conviction and a breathtaking attention to the kind of personal detail that makes his books such compelling reading."
— Alison Weir (praise for CHARLEMAGNE)

"Wilson interrelates the personal and political with an effectiveness that few other biographers have matched."
— The Sunday Telegraph