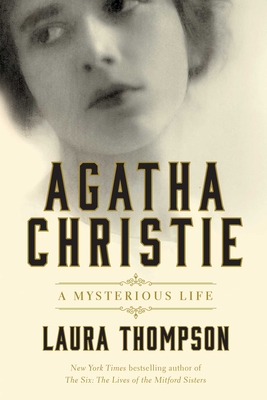 The author of the New York Times bestselling The Six now turns her formidable biographical skills to the greatest crime writer in the world, Agatha Christie.

It has been one hundred years since Agatha Christie wrote her first novel and created the formidable Hercule Poirot. A brilliant and award winning biographer, Laura Thompson now turns her sharp eye to Agatha Christie. Arguably the greatest crime writer in the world, Christie's books still sell over four million copies each year—more than thirty years after her death—and it shows no signs of slowing.

But who was the woman behind these mystifying, yet eternally pleasing, puzzlers? Thompson reveals the Edwardian world in which Christie grew up, explores her relationships, including those with her two husbands and daughter, and investigates the many mysteries still surrounding Christie's life, most notably, her eleven-day disappearance in 1926.

Agatha Christie is as mysterious as the stories she penned, and writing about her is a detection job in itself. With unprecedented access to all of Christie's letters, papers, and notebooks, as well as fresh and insightful interviews with her grandson, daughter, son-in-law and their living relations, Thompson is able to unravel not only the detailed workings of Christie's detective fiction, but the truth behind this mysterious woman.

"Thompson mines this trove for clues not only to the writer’s inner life but also to her fiction’s recurring themes and enduring appeal. The woman who emerges in this elegant biography—shrewd, elusive, practical, romantic—cannot be defined by the era she immortalized. The queen of the cozy may be, in Thompson’s words, ‘stuck for all eternity at a tea-party in a country vicarage, sticking a fork into her seedcake as the bank manager’s wife chokes on a strychnine sandwich,’ but the lasting image here is poignant and fittingly chimerical."
— The Wall Street Journal

"A splendid biography. Thompson artfully demonstrates how Christie revealed in the Westmacott novels her pain about her collapsed first marriage, her difficult relationship with Rosalind and her overwhelming love for her mother. Christie, in essence, was the Elena Ferrante of her day [and] Christie’s flame burns extra bright in the present."
— Washington Post

"Sympathetic and insightful. Thompson makes cogent arguments for the craft and depth of Christie’s writing that will surely lead new readers to her books—exactly where she would have wanted the focus."
— Publishers Weekly

"A deep, reverential glide through the quiet life of one of the great writers of the 20th century. This rhapsodic biography is an account of Christie’s real life with passages from her fiction artfully interwoven, illustrating how the very private Christie really felt about things."
— Book Reporter

"Thompson shows how Christie infused her stories with experiences and incidents drawn from her own life, including her disappearance. This ambitious, thorough biography will delight fans of the author and her iconic detective characters, Poirot and Miss Marple."
— Ellery Queen Mystery Magazine

"A tour-de-force, this thorough and eminently readable book will delight current Christie fans while also engaging new ones. Ideal for all collections. Meticulously researched and painstakingly crafted, this even-handed new biography by Thompson (The Six) sheds respectful insight into her subject while carefully untangling previous speculation and gossip. Thompson is particularly strong when describing Christie’s disappearance and how it affected her life: Christie is revealed as an imaginative, hardworking woman who loved life but who also shunned publicity."
— Library Journal (starred)

"A triumph. No other biography of Christie that I've read so powerfully summons up the atmosphere of Christie's own writing: that singular blend of menace and the mundane."
— NPR's 'Fresh Air'

"Agatha Christie is a subject of fascination. Thompson narrates the episode [of Christie’s disappearance] from Christie's perspective, so that the interlude takes on a dreamlike quality. ‘No life is a code to be deciphered,’ Thompson writes. ‘Omniscience is for Hercule Poirot. Real life knows less; it has the beauty of mystery.’ Christie captured that mystery brilliantly in her books, and Thompson explores the mysteries of author's life."
— Shelf Awareness

"Fascinating. Thompson is a sympathetic and objective biographer. Thompson covers the disappearance uniquely, writing in a voice that Christie might have had while experiencing that strange time. In the end, Agatha Christie is portrayed here as a driven, at times vulnerable, woman who found what she wanted and needed to do with her life. For that, and for Laura Thompson’s new biography, we are all richer."
— The Minneapolis Star Tribune

"An intimate and astute exploration of the woman and her work. What fundamentally informs this biography is the perception [Thompson] brings to her famous but cryptic subject. Her prose, blessed by British eloquence and unencumbered by excessive British reticence, enhances her shrewd conclusions about Agatha’s life. Thompson, with a sure talent for biographical detection, invests this engrossing and intensely personal study with passion and admiration."
— Richmond Times-Dispatch