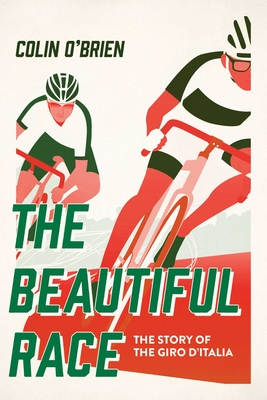 The Story of the Giro d'Italia

A celebration of the Giro d'Italia in all its kaleidoscopic glory after more than one-hundred stagings of this glorious race.

Born out of tumult in 1909, the Giro d'Italia helped unite a divided Italy. Since then, it has reflected it's home country—the Giro's capricious and unpredictable nature matches the passions and extremes of Italy itself.

A desperately hard race through a stunning landscape, the Giro has bred characters and stories that dramatize the shifting culture and society of its home. There was Alfonsina Strada, who cropped her hair and raced against the men in 1924, or Ottavio Bottecchia, expected to challenge for the winner's "Maglia Rosa," the famed pink jersey, in 1928, until he was killed on a training ride—most likely by Mussolini's Black Shirts. And what would a book about the Giro d'Italia be without Fausto Coppi, the metropolitan playboy with amphetamines in his veins, guided by a mystic blind masseur, who seemed to glide up the peaks. But let us not forget his arch rival Gino Bartali—humble, pious and brave. It recently emerged that he smuggled papers for persecuted Jewish Italians. Then there is the Giro's most tragic hero, Marco Pantani, born to climb but fated to lose.

Halted only by World Wars, the Giro has been contested for over a century, and The Beautiful Race is a richly written celebration of this legendary race.

Praise For The Beautiful Race: The Story of the Giro d'Italia…

"The Giro and Italy, Italy and the Giro: this book helps to explain how each has helped shape the other.  An excellent introduction to the history of the Giro and all that it means to Italy and cycling. "
— Road Magazine

"There is a feast of anecdote to enjoy.  A marvelous account and a tremendously exciting story. "
— The Guardian

"O’Brien wonderfully captures the colorful characters and landscapes that have shaped a century of Italy’s national cycling race. An excellent, detailed narrative that expertly places the Giro within the context of modern Italian history."
— Publishers Weekly

Colin O'Brien is an Irish sports writer based in Rome. His passion for cycling and the European professional racing scene was ignited when Marco Pantani and the world's best riders came to Dublin with the 1998 Tour de France. He contributes to leading publications worldwide, including Rouleur, Peloton, Cyclist, and ProCycling.
Loading...
or support indie stores by buying on