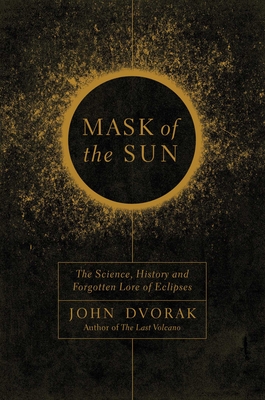 Mask of the Sun (Paperback)

What do Emily Dickinson, slave revolts, Babylonian Kings, and Monticello all have in common? A solar eclipse. Whether it was deciding on the location of a grand home (or castle), inspiring poetry, timing battles and revolts, or planning expeditions, eclipses have inspired fear and fascination. Solar eclipses allowed Ptolemy to determine the length of the Mediterranean and helped Einstein establish his General Theory of Relativity. Preliterate societies recorded eclipses on turtle shells found in "The Wastes of Yin" and on the Mayan "Dresden Codex." Eclipses were later instrumental in the creation of longitude and allowed Hubble to understand the expansion of the Universe (and disprove another theory of Einstein's in the process). John Dvorak, the acclaimed author of Earthquake Storms and The Last Volcano, examines this amazing phenomena and reveals the humanism behind the science. With insightful detail and vividly accessible prose, he provides explanations as to how and why eclipses occur—as well as insight into the eclipse of 2017, which was visible across North America.

Dr. John Dvorak, PhD, worked on volcanoes and earthquakes for the U.S. Geological Survey, first at Mount St. Helens, then as a series of assignments in California, Hawaii, Italy, Indonesia, Central America and Alaska. He has written cover stories for Scientific American, Physics Today and Astronomy magazines, as well as a series of essays about earthquakes and volcanoes for American Scientist. Dvorak has taught at the University of Hawaii and lectured at UCLA, Washington University in St. Louis, the Lunar and Planetary Institute in Houston, and the Smithsonian Institution in Washington, D.C, among others

Praise For Mask of the Sun…

For a more expansive look at how eclipses have been mythologized throughout history, turn to Mask of the Sun. John Dvorak offers useful, engaging background, as well as a deeper understanding of what to expect this August.

Dvorak’s meticulously researched book covers the history of human reactions and interpretations from Homer to the Bible and beyond. He doesn’t skimp on the science, either; Mask of the Sun is a well rounded, entertaining, and authoritative survey.


If a simple alignment of astronomical bodies can move a 21st-century scientist to tears it’s perhaps not surprising that eclipses of the sun and moon have haunted the human imagination since our species first looked up at the sky. Mask of the Sun charts the history of this obsession through dozens of stories and anecdotes that illustrate how deeply embedded eclipse lore is in cultures across the world.

This book provides an excellent overview of how eclipses work and how people have interpreted them through time. Dvorak explains complex scientific ideas succinctly and clearly without resorting to formula or jargon. Furthermore, he does an excellent job of conveying the wonder of eclipses, describing both their historical-cultural value and the inspirational effect they have on people. A splendid introduction to all aspects of eclipses; for all readers interested in science.