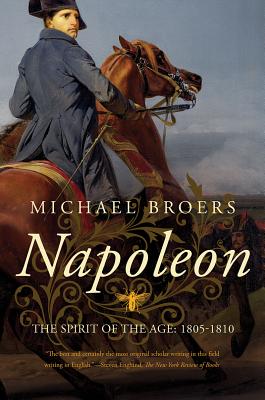 The second volume in this dynamic three-part life of Napoleon, covering the tumultuous years of 1805 to 1810—marking the zenith of Napoleon’s power and military might across Europe.

This is the second volume of Michael Broers’ three-volume life of Napoleon, covering 1805 to 1810, a period which marks the zenith of Napoleon’s power and military success. Like volume one, it is based on the new version of Napoleon’s correspondence, made available by the Fondation Napoléon in Paris.

Spirit of the Age opens with Napoleon’s as yet untested army making its way through the Bavarian Alps in the early winter of 1805, to fall upon the unsuspecting Austrians and Russians, and crushing them at Austerlitz. It follows the army into Spain, in 1808, most ill-considered step in his career as ruler, and then through the most daunting triumph of all, the final defeat of Austria at Wagram, in 1809, the bloodiest battle in European history up to that time.

These five years encompass the dramas of Napoleon’s separation from Josephine amid the turmoil of ruling a pan-European empire, his clash with the Pope and excommunication, and his loss of trust in many of those closest to him. It closes with his marriage to Marie-Louise, the daughter of his defeated enemy, the Emperor of Austria. With the greatest "trophy bride” in history on his arm, Napoleon turned to face his only remaining enemy, Britain, and the challenge of ruling an empire that now spans the entirety of Europe.

"Throughout the book, Broers delivers page-turning accounts of the many military engagements of the time. As in the first book, Broers provides an excellent character study of Napoleon. Readers will eagerly await the third volume."
— Kirkus Reviews

"This masterly second volume of Michael Broers’s biography illuminates the middle years of Napoleon’s career. [Broers] brings out unforgettable details. His accounts of Napoleonic battles are suffused with the characters and psychology of their chief protagonists."
— The Daily Mail (UK)

"Offers a wonderful sense of the genius?and man?who was so stunningly able to remake European boundaries. Among the plethora of Napoleon biographies, this is immensely engaging."
— Kirkus Reviews [praise for Michael Broers's 'Napoleon: Soldier of Destiny']

"Breathtaking. The best—and certainly the most original—scholar writing in this field writing in English. Broers succeeds admirably."
— The New York Review of Books [praise for Michael Broers's 'Napoleon: Soldier of Destiny']

"The great strength of Broers’s book arises from its detail, empathy, and even-handedness. He presents his information clearly and sometimes even lyrically. This is a serious work, the product of reflection as well as research befitting a distinguished professor of Western European History at Oxford."
— Michael Dirda, The Washington Post [praise for Michael Broers's 'Napoleon: Soldier of Destiny']

Michael Broers is a professor of Western European history at Oxford University. He is the author of The Napoleonic Empire in Italy, winner of the Grand Prix Napoleon Prize, and Napoleon: Soldier of Destiny (Pegasus). He lives in Oxford, England.
Loading...
or
Not Currently Available for Direct Purchase