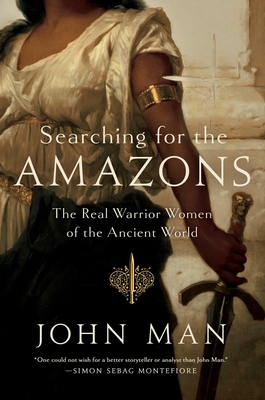 Searching for the Amazons

The Real Warrior Women of the Ancient World

A deeply researched and sweeping history that redefines our understanding of the Amazons and their culture, tracking the ancient legend into the modern world and examining its significance today.

Since the time of the ancient Greeks we have been fascinated by accounts of the Amazons, an elusive tribe of hard-fighting, horse-riding female warriors. Equal to men in battle, legends claimed they cut off their right breasts to improve their archery skills and routinely killed their male children to purify their ranks.

For centuries people believed in their existence and attempted to trace their origins. Artists and poets celebrated their battles and wrote of Amazonia. Spanish explorers, carrying these tales to South America, thought they lived in the forests of the world’s greatest river, and named it after them. In the absence of evidence, we eventually reasoned away their existence, concluding that these powerful, sexually liberated female soldiers must have been the fantastical invention of Greek myth and storytelling. Until now.

Following decades of new research and a series of groundbreaking archeological discoveries, we now know these powerful warrior queens did indeed exist. In Searching for the Amazons, John Man travels to the grasslands of Central Asia—from the edge of the ancient Greek world to the borderlands of China—to discover the truth about the truth about these women whose legend has resonated over the centuries.

Praise For Searching for the Amazons: The Real Warrior Women of the Ancient World…

"Absorbing and beautifully written. A thrilling account. "
— The Guardian

"A great historical resource about a mysterious people that also shows how women, through the ages, have gathered strength from each other and continue to do so today."
— Kirkus Reviews

"One could ask for no better storyteller or analyst than John Man. "
— Simon Sebag Montefiore, NEW YORK TIMES bestselling author of THE ROMANOVS

John Man is a historian specializing in Asia and the nature of leadership. John's books have been published in over twenty languages around the world and include bestselling biographies of Genghis Khan, Kublai Khan, and Attila the Hun, as well as histories of the Great Wall of China and the Mongolian Empire. He lives in England.
Loading...
or
Not Currently Available for Direct Purchase