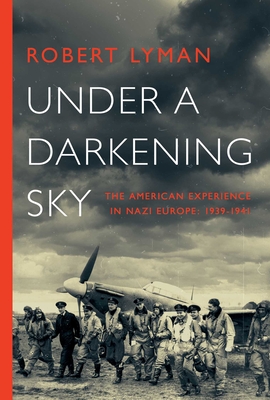 Under a Darkening Sky (Hardcover)

A vivid social history of the American expatriate experience in Europe between 1939 and 1941, as the Nazi menace brings a shadow over the continent, heralding the storms of war.

A poignant and powerful portrait of Europe in the years between 1939 and 1941—as the Nazi menace marches toward the greatest man-made catastrophe the world has ever experienced—Under a Darkening Sky focuses on a diverse group of expatriate Americans. Told through the eyes and observations of these characters caught up in these seismic events, the story unfolds alongside a war that slowly drags a reluctant United States into its violent embrace.

This vibrant narrative takes these dramatic personalities and evokes the engagement between Europe and a reluctant America from September 3, 1939—when Britain declares war—through the tragedy of Pearl Harbor in December 1941. Robert Lyman's distinctively energetic storyline brings together a wide range of encounters, conversations, and memories, including individuals from across the social spectrum, from Josephine Baker to the young Americans who volunteered to fight in the RAF, as part of the famous “Eagle Squadrons.”

Hundreds of young Americans—like the aces James Goodison, Art Donahue, and the wealthy playboy Billy Fiske—smuggled themselves into Canada so that they could volunteer for the cockpits of Spitfires and Hurricanes, as they flew against the deadly Luftwaffe over ever-darkening skies in London.

Robert Lyman is the author of numerous books, including Among the Headhunters and The Real X-Men. Widely regarded as one of Britain's most talented historians, he is a former officer in the British Army and a fellow of the Royal Historical Society. He lives in Berkshire, England.

Praise For Under a Darkening Sky: The American Experience in Nazi Europe: 1939-1941…

"Lyman uses the firsthand accounts of students, housewives, academics, journalists, businesspeople, and others to provide a clear and unsettling account of the North Americans who warned of Nazi Germany before Hitler declared war on the U.S. A well-constructed, valuable alternative to military-focused histories of the time."
— Publishers Weekly (starred)

"A historical study of American expatriates and travelers—George Kennan, Eric Sevareid, Josephine Baker, and many more—in the dawning years of World War II. The most compelling parts of Lyman's portraits of Americans in Europe in the time of what Churchill called ‘the gathering storm’ concern people most readers will not have heard of, such as the Quaker aid worker Leonard Kenworthy, whose dreams were haunted by the faces of the Jews whom he could not save after the Nazi deportations began."
— Kirkus Reviews
or support indie stores by buying on
Copyright © 2020 American Booksellers Association