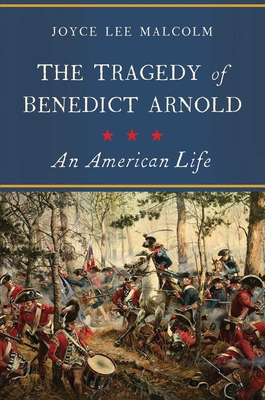 The Tragedy of Benedict Arnold

A vivid and timely re-examination of one of young America’s most complicated figures: the war hero turned infamous traitor, Benedict Arnold.

Proud and talented, history now remembers this conflicted man solely through the lens of his last desperate act of treason. Yet the fall of Benedict Arnold remains one of the Revolutionary period’s great puzzles. Why did a brilliant military commander, who repeatedly risked his life fighting the British, who was grievously injured in the line of duty, and fell into debt personally funding his own troops, ultimately became a traitor to the patriot cause?

Malcolm skillfully unravels the man behind the myth and gives us a portrait of the true Arnold and his world. There was his dramatic victory against the British at Saratoga in 1777 and his troubled childhood in a pre-revolutionary America beset with class tension and economic instability. We witness his brilliant wartime military exploits and his contentious relationship with a newly formed and fractious Congress, who were fearful of powerful military leaders.

Praise For The Tragedy of Benedict Arnold: An American Life…

"‘Since the fall of Lucifer,’ Nathanael Greene, a general in the Continental Army, wrote after the Revolutionary War, ‘nothing has equaled the fall of Arnold.’ Joyce Lee Malcolm knows this story, and yet she has embraced the thankless, if not Sisyphean, task of contextualizing America’s first traitor in her new and aptly named biography, The Tragedy of Benedict Arnold. Malcolm has written a fine biography—the best in recent memory, in fact."
— The Washington Post

"Joyce Lee Malcolm describes 'the most infamous man in American history' as a two-dimensional caricature in the minds of most Americans. Ms. Malcolm’s The Tragedy of Benedict Arnold does show that Arnold’s hunger for recognition and refusal to compromise embroiled him in conflicts that weakened his commitment to independence. Arnold was especially resentful, she notes, of the ill treatment he felt he had received from civilian politicians. She draws on colonial history and the outlook of the 18th-century Atlantic world to describe a profound civilian distrust of professional soldiers and standing armies. Ms. Malcolm, a historian at George Mason University’s law school, describes how tensions between George Washington and the Continental Congress, whose members had adopted this wary civilian view of the military, fueled ever greater discontent within the Continental Army. Ms. Malcolm suggests that Arnold—helped along by his prickly personality and the trauma of a crippling wound—reacted by switching sides."
— The Wall Street Journal

"An attempt to bring understanding, if not forgiveness, to the story of Benedict Arnold. Examining a variety of primary sources, Malcolm dives further into the psyche of the man synonymous with the word ‘traitor.’"
— Kirkus Reviews

"Solid. A readable account of a remarkable life."
— Publishers Weekly

"Acknowledges and builds on more than a century of writings on the subject, bringing a fresh perspective by making use of resources only recently discovered. A compelling read for anyone interested in early American biographies."
— Library Journal

"Malcolm does for Benedict Arnold what Ron Chernow did for Alexander Hamilton, reexamining and redeeming a complex historical figure. Though Malcolm’s tome is not as lengthy as Chernow’s, she does an excellent job of transforming American history’s best-known villain into a war hero who loved his country so much that he gave his heart, soul, and body to the American cause during the Revolutionary War. This adventurous, entertaining read will appeal to a broad audience, and book clubs will thoroughly enjoy this game-changer, a multilayered reassessment of a long misunderstood American."
— Booklist (starred)

Joyce Lee Malcolm is a professor at George Mason University School of Law. She is the author of Guns and Violence; Peter's War; and To Keep and Bear Arms. She lives in Alexandria, Virginia.
Loading...
or
Not Currently Available for Direct Purchase