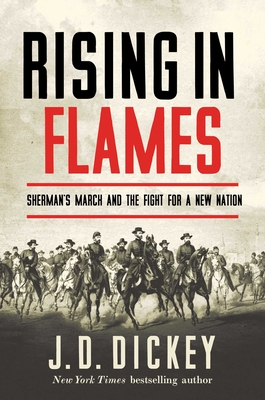 Sherman's March and the Fight for a New Nation

A New York Times bestselling historian sheds new light on Sherman’s epic “March to the Sea,” especially the soldiers, doctors, nurses, and civilians who would change the nation for the better.

America in the antebellum years was a deeply troubled country, divided by partisan gridlock and ideological warfare, angry voices in the streets and the statehouses, furious clashes over race and immigration, and a growing chasm between immense wealth and desperate poverty.

The Civil War that followed brought America to the brink of self-destruction. But it also created a new country from the ruins of the old one—bolder and stronger than ever. No event in the war was more destructive, or more important, than William Sherman’s legendary march through Georgia—crippling the heart of the South’s economy, freeing thousands of slaves, and marking the beginning of a new era.

This invasion not only quelled the Confederate forces, but transformed America, forcing it to reckon with a century of injustice. Dickey reveals the story of women actively involved in the military campaign and later, in civilian net- works. African Americans took active roles as soldiers, builders, and activists. Rich with despair and hope, brutality and compassion, Rising in Flames tells the dramatic story of the Union’s invasion of the Confederacy, and how this colossal struggle helped create a new nation from the embers of the Old South.

Praise For Rising in Flames: Sherman's March and the Fight for a New Nation…

"A page-turning and highly original account, one of the best in the long line of ‘Sherman’s March’ books. [Dickey] writes grippingly about the army’s adventures on campaign . . . and he has ingeniously chosen to view much of the story through the experience of a handful of colorful soldiers and civilians. No one interested in Sherman’s March should be deprived of his lively narrative. Absolutely spellbinding."
— The Wall Street Journal

"Interesting. Dickey looks at the march mainly through the eyes of soldiers and other participants, like nurses."
— New York Times Book Review

"This superlative, impeccably researched account of Sherman’s march through Georgia in 1864–1865 brings to life Civil War history through personal accounts and vivid descriptions of military strategy. Dickey tells the story of Sherman’s march unforgettably, with power on every page."
— Publishers Weekly (starred)

"A study in unintended consequences as a reactionary Civil War commander unleashed a series of progressive forces. Dickey ably captures the shape and feel of the desperate battles Sherman's forces waged. A readable blend of military and political history; a valuable addition to the literature."
— Kirkus Reviews

"Fast-moving and engrossing. A fascinating book with new perspectives for both Civil War buffs and more general readers."
— Library Journal

"This is more than straightforward biography. In assessing Sherman’s Atlanta campaign, the March to the Sea, Dickey concentrates not only on Sherman but also on lesser-known unionists and thus provides a unique perspective on this oft-written-about topic. The military aspects of the march and what Sherman called “hard war” are vividly recounted in their dreadful detail. A valuable contribution to Civil War history."
— Booklist

"Dickey looks at Sherman’s complex and often conflicting character, but also studies how the march affected Northern soldier and civilians. These diverse accounts, blended into the narrative, provide a deeper perspective on how Sherman’s March changed people, especially in transforming a war about secession into a crusade to free slaves. A fine and unique addition to the ever-growing mound of studies of Sherman’s march."
— Civil War Times

J.D. Dickey is the New York Times bestselling author of Empire of Mud, a history of the troubled rise of Washington, D.C., in the nineteenth century and Rising in Flames: Sherman’s March and the Fight for a New Nation, also published by Pegasus Books. He lives in the Pacific Northwest.
Loading...
or
Not Currently Available for Direct Purchase