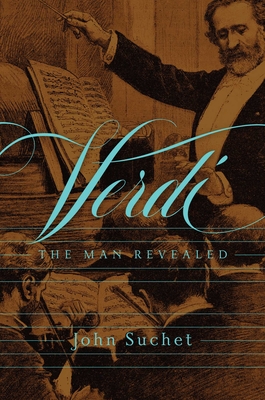 Giuseppe Verdi remains Italy’s greatest operatic composer and a man of apparent contradictions—vividly brought to life through a nuanced examination of his life and monumental music.

Giuseppe Verdi remains the greatest operatic composer that Italy, the home of opera, has ever produced. Yet throughout his lifetime he claimed to detest composing and repeatedly rejected it. He was a landowner, a farmer, a politician and symbol of Italian independence; but his music tells a different story.

An obsessive perfectionist, Verdi drove collaborators to despair but his works lauded from the start as dazzling feats of composition and characterization. From Rigoletto to Otello, La Traviatato to Aida, Verdi’s canon encompassed the full range of human emotion. His private life was no less complex: he suffered great loss, and went out of his way to antagonize supporters and his own family. An outspoken advocate of Italian independence and a sharp critic of the church, he was often at odds with nineteenth-century society.

In Verdi: The Man Revealed, John Suchet attempts to get under the skin of perhaps the most private composer who ever lived. Unraveling his protestations, his deliberate embellishments and disavowals, Suchet reveals the true character of this great artist—and the art for which he will be forever known.

Praise For Verdi: The Man Revealed…

"A introduction to Verdi as a man rather than as a composer. Suchet takes great pains not to get bogged down in boring details or obscure music theory. A book meant to stoke enthusiasm, ideal for someone who has seen a Verdi opera or two and wants to know more."
— Christian Science Monitor

"Suchet is the rare scholar who knows his subject, writes like a dream, and wears his research lightly. This book is handsomely laid out with wide margins, ample illustrations, and sentences from the text dropped in the margins along the way to tantalize readers. Obviously, music lovers will want this volume, but the subject is so lively and the presentation so attractive that it will appeal to all who value a solid biography."
— Library Journal (starred)

"A compact, sumptuously illustrated, insightful biography of the Italian composer. The author does a masterful job capturing the life and times as well as explaining the maestro's significant contributions to music history. Once again, Suchet hits his mark."
— Kirkus Reviews

"Suchet writes about the vaulted world of opera with insight and wit. This handsomely designed edition is beautifully illustrated with theatrical illustrations and dramatic period photography."
— New York Journal of Books

John Suchet presents Classic FM's flagship morning program in England. Before turning to classical music, John was one of the England's most respected television journalists. As a reporter he covered world events, including the Iran revolution, the Soviet invasion of Afghanistan and the Philippines revolution. John has been honored for both roles. In 1986 he was voted Television Journalist of the Year, in 1996 Television Newscaster of the Year, and in 2008 the Royal Television Society awarded him a Lifetime Achievement Award. The Royal Academy of Music has awarded him an Honorary Fellowship in recognition of his work on Beethoven, having written six books on the composer, including the highly acclaimed Beethoven: The Man Revealed. His bestselling biography of the Strauss family, The Last Waltz: The Strauss Dynasty and Vienna, was published in 2015.
Loading...
or
Not Currently Available for Direct Purchase