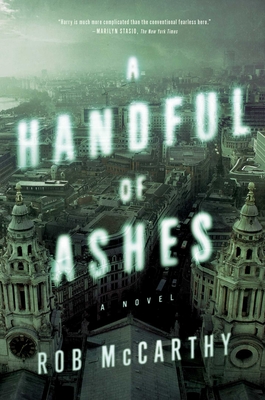 A Handful of Ashes

In the new Dr. Harry Kent thriller, a whistleblowing doctor commits suicide— or so it seems. When it turns out to be murder, Harry digs deeper to uncover the truth, in this perfect mix of detective novel and medical drama.

Susan Bayliss became notorious when she blew the whistle on her boss, a famous heart surgeon at a renowned children’s hospital. She accused him of negligence, operations were halted, and an inquiry launched. But in the end, she was the one suspended as a troublemaker.

Now Dr. Harry Kent, a medical examiner with the Metropolitan Police, has been called out to certify her suicide. But something about the scene is wrong; it appears someone held Susan down while she died . . .

The grieving parents of the children who died demand answers. e hospital is stonewalling. Everyone has secrets. And it’s up to Harry Kent and Detective Chief Inspector Frankie Noble to find out which secrets were worth killing for.

Praise For A Handful of Ashes: A Novel…

"Outstanding. McCarthy delivers a startling ending and perfectly blends the whodunit plot with Harry’s struggles with his addiction and his relationship with Frankie."
— Publishers Weekly (starred)

"This second entry in an excellent medical thriller/police procedural series fulfills the promise of the first volume. Fast-paced with an unexpected ending, this novel has everything fans of the genre could want."
— Library Journal

"Delivers its gruesome details in the authentic voice of the medical student McCarthy happens to be. Presented with jarring realism and zero sentimentality."
— New York Times Book Review

"An accomplished first novel. McCarthy provides a fascinating look at the sociology of crime and policing."
— Publishers Weekly

"Dr. Harry Kent, the protagonist of English author (and medical student) Rob McCarthy’s A Handful of Ashes, takes his job as a medical examiner with London’s Metropolitan Police very much to heart. With the gifted Mr. McCarthy in charge, the prognosis is guardedly optimistic."
— Wall Street Journal

"The Hollow Men is gritty and intense; it’s complex and explosive. The characters in this debut are exemplary and McCarthy is unquestioningly a writer to watch."
— Shelf Awareness

"A perfect mix of detective novel and medical drama. The grit and level of detail presented in [McCarthy’s] narratives shape the foundation of good story and his character development effort is admirable. McCarthy is a new voice to watch and this title makes a good companion for fans of medical thrillers."
— Mystery Tribune

Rob McCarthy is a medical student in his fourth year of study, who started writing crime novels when the neuroanatomy textbooks threatened to take his sanity. He lives in South London, where he is currently working on two more novels featuring Dr Harry Kent.
Loading...
or
Not Currently Available for Direct Purchase