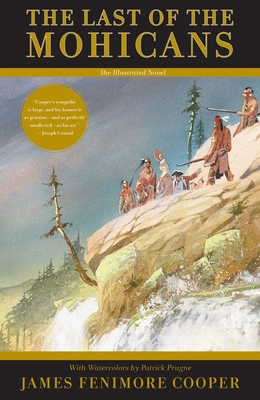 The Last of the Mohicans

Presented for the first time as an illustrated novel—with unabridged text—experience anew the war for control of the New World in this classic tale by James Fenimore Cooper.

The wild rush of action in this classic frontier adventure novel has made The Last of the Mohicans the most popular of James Fenimore Cooper’s “Leatherstocking Tales.”

Deep in the forests of upper New York State, the brave woodsman Hawkeye—Natty Bumppo—and his loyal Mohican friends Chingachgook and Uncas become embroiled in the bloody battles of the French and Indian War.  The abduction of the beautiful Munro sisters by hostile savages; the treachery of the renegade brave Magua; the ambush of innocent settlers; and the thrilling events that lead to the  final, tragic confrontation between rival war parties create an unforgettable, spine-tingling picture of life on the frontier.

At the center of the novel is the infamous massacre of British troops and their families by Indian allies of the French at Fort William Henry in 1757. Around this historical event, Cooper builds a romantic fiction of captivity, sexuality, and heroism, in which the destiny of the Mohican Chingachgook and his son Uncas is inseparable from the lives of Alice and Cora Munro and of Hawkeye the frontier scout. And as the idyllic wilderness gives way to the forces of civilization, the novel presents a moving portrayal of a vanishing people—and the end of its way of life in the great American forests.

Praise For The Last of the Mohicans: The Illustrated Novel…

"Cooper’s sympathy is large, and his humor is as genuine—and as perfectly unaffected—as his art."
— Joseph Conrad

James Fenimore Cooper was born on September 15, 1789, and grew up in the frontier village of Cooperstown, New York, in the heart of the wilderness he was to immortalize in his novels. Cooper created two unique genres that were to become staples in American literature—the sea romance and the frontier adventure story. In The Last of the Mohicans (1826), Natty Bumppo becomes the well-loved Hawkeye, befriended by Chingachgook; the novel remains a favorite American classic. By the time of his death on September 14, 1851, Cooper was considered America’s “national novelist.”
Loading...
or support indie stores by buying on