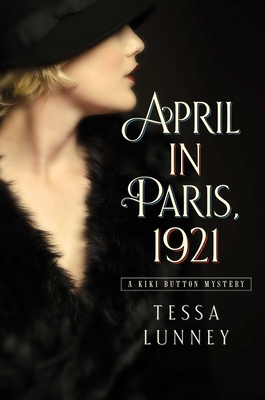 "One of those rare debuts that absolutely wowed me. Exhilarating and atmospheric, perfectly capturing a post-war Paris where people of all types could drown their sorrows and become someone else, even if it’s just for a while. Lunney successfully combines mainstream mystery with spy intrigue, making for an intoxicating concoction, and Kiki is a powerful tour guide. If you like unusual heroines that are the perfect mix of moxie and vulnerability, you can’t go wrong with this one. I can’t wait for more adventures with the fascinating Kiki Button and her singular world."
— Criminal Element

"Button is naughtier than Kerry Greenwood’s Phryne Fisher, as strong as Suzanne Arruda’s Jade del Cameron, and every bit as clever as Susan Elia MacNeal’s Maggie Hope. This thoroughly entertaining, delightfully witty debut is imbued with Paris’ unique ambiance and will have readers eagerly awaiting Button’s next adventure."

“Lunney’s vibrant picture of Paris, chock-full of flapper fashion and cameos of the Lost Generation, will leave readers eager for more.”
— Publishers Weekly

"An atmospheric, verbose historical novel that foreshadows the next war while reveling in the debauched bohemianism of Paris between the wars. Spying is just part of the excitement."

"A deftly crafted mystery that combines artistic gossip with interwar political history through witty banter, steamy scenes, and fast action. A compelling and entertaining read from cover to cover, Tessa Lunney's April in Paris, 1921 will prove to be an immediate and enduringly popular addition to community library Mystery/Suspense collections."
— Midwest Book Review

"Tessa Lunney brilliantly evokes the Années folles of the Roaring Twenties as her heroine—an Australian debutant-turned-nurse-turned-spy—Kiki Button traipses through Paris’s sensual bohemian culture hunting for a World War I mole and stolen Pablo Picasso painting."
— Julie McElwain, author of 'A Murder in Time' and 'A Twist in Time'

"Liberated from her wartime duties as a nurse, Kiki Button, Tessa Lunney’s main character of her debut April in Paris, 1921, is a gossip columnist-cum-detective who finds herself mixed up in a mystery set against the backdrop of post-WWI Paris. Lunney takes the reader on a breathless, page-turning journey through cafes, streets, and dark alleys of this Bohemian time period, searching for a stolen piece of art. Kiki, who is charming, self-possessed, and sexually free, is readable and fun, a modern woman blazing though the Années folles no holds barred."
— John Copenhaver, author of 'Dodging and Burning'

Tessa Lunney is a novelist, short fiction writer, reviewer and poet. Her debut novel, April in Paris, 1921, was published by Pegasus Books. Her short fiction has won awards in the USA and Australia, and her work has appeared in Southerly, Griffith Review, Cordite, Best Australian Poems, among others. She holds a Doctorate in Creative Writing on Australian war fiction from Western Sydney University. She lives in Sydney, Australia.
Loading...
or
Not Currently Available for Direct Purchase