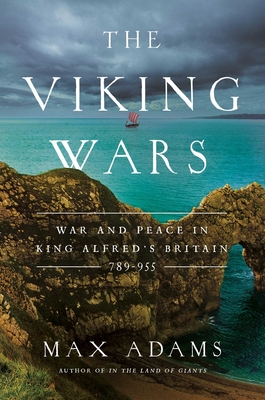 A history of Britain in the violent and unruly era between the first Scandinavian raids in 789 and the final expulsion of the Vikings from York in 954.

In 865, a great Viking army landed in East Anglia, precipitating a series of wars that would last until the middle of the following century. It was in this time of crisis that the modern kingdoms of Britain were born. In their responses to the Viking threat, these kingdoms forged their identities as hybrid cultures: vibrant and entrepreneurial peoples adapting to instability and opportunity.

Traditionally, Alfred the Great is cast as the central player in the story of Viking Age Britain. But Max Adams, while stressing the genius of Alfred as war leader, law-giver, and forger of the English nation, has a more nuanced narrative approach to this conventional version of history. The Britain encountered by the Scandinavians of the ninth and tenth centuries was one of regional diversity and self-conscious cultural identities, depicted in glorious narrative fashion in The Viking Wars.

"A scholarly narrative of the Vikings in King Alfred's Britain. The author is commendably strict on historical accuracy. Impeccably researched. Persistent—and academic—readers will gather a wealth of knowledge."
— Kirkus Reviews

"This is much more than a book about the Vikings versus King Alfred. Adams’s great achievement is to cover events throughout the whole of Britain with some excursions into Ireland and Europe as well."
— The Times Literary Supplement

"This is much more than a book about the Vikings versus King Alfred. Adams’s great achievement is to cover events throughout the whole of Britain with some excursions into Ireland and Europe as well."
— The Times Literary Supplement

"A brilliantly written, organized, and presented study, The Viking Wars will prove to be a valued and enduringly popular addition to both community and academic library Viking History collections."
— Midwest Book Review

"The most elaborate picture yet made of what the Viking raids actually meant to the people who endured them. 2018 has seen a small bumper-crop of excellent books about the Viking Age, and Adams has written the best of the bunch, the lively-yet-scholarly modern epic history the tale deserves."
— Open Letters Review

"This is a beautifully crafted and impeccably compiled book, and one that is certainly a must-read for anyone with even a passing interest in the events and figures that molded Britain during the reign of the Vikings."
— All About History

Max Adams is the author of Admiral Collingwood, The Prometheans, and The King in the North, all published in Great Britain. This is his first book to be published in the United States. A university professor, Max lives in the northeast of England.
Loading...
or
Not Currently Available for Direct Purchase