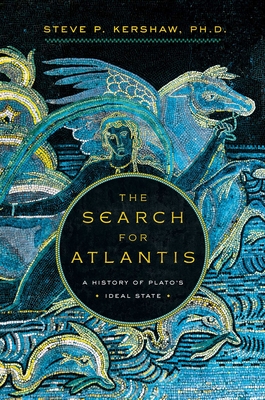 The Search for Atlantis

A History of Plato's Ideal State

A vivid exploration of the legend of Atlantis and its enduring influence on Western culture—from its origins in antiquity to the modern era.

The Atlantis story remains one of the most haunting and enigmatic tales from antiquity, and one that still resonates very deeply with the modern imagination. But where did Atlantis come from, what was it like, and where did it go to?

Atlantis was first introduced by the Greek philosopher Plato in the fourth century BC. As he discusses the origins of life, the universe, and humanity, the great thinker puts forward a stunning description of Atlantis—an island paradise with an ideal society. But the Atlanteans soon degenerate and become imperialist aggressors: they choose to fight against antediluvian Athens, which heroically repels their mighty forces, before a cataclysmic natural disaster destroys the warring states.

Plato's dialogues appear remarkably prescient today. Not because they invite a search for a mysterious lost continent, but because of their warnings about the pernicious effects of wealth and power on a ruling class: Atlantis-style luxury, excess, corruption, and imperialism can lead only to decay and disaster. This ever-important tale should be prescribed reading for every political leader.

Plato’s tale of a great empire that sank beneath the waves has sparked thousands of years of debate over whether Atlantis really existed. But did Plato mean his tale as history—or just as a parable to help illustrate his philosophy?

Praise For The Search for Atlantis: A History of Plato's Ideal State…

"Mr. Kershaw’s subject is not Plato’s text but the ways in which readers have dealt with it over the millennia. As his exhaustive survey shows, Atlantis has been adapted to countless ideologies and agendas over time, serving the needs of every sort of reader—‘harmless hippies or Heinrich Himmler,’ in Mr. Kershaw’s memorable phrase. The tortured moves that Mr. Kershaw documents, by which the Atlantis myth has been recast as fact and willfully misread, remind us of how vital such distinctions are for a society striving to stay free."
— Wall Street Journal

"In addition to presenting assorted bizarre theories, Kershaw explores Greek and Egyptian mythology, Homeric works, and mid-fifth-century Athenian culture. He believes Plato's message is ‘a timeless one about the pernicious effects of wealth on the ruling class.’ A treasure trove of information for readers seduced by the drowned land."
— Kirkus Reviews

"A comprehensive debunking of the idea that Atlantis is an actual historical location. Readers interested in the classics will find this satisfying."
— Publishers Weekly

Dr. Stephen P. Kershaw has spent the majority of his career in the world of the ancient Greeks, both intellectually and physically. He has been a Classics tutor for twenty-five years and currently teaches at Oxford University. Kershaw has been commissioned to write Oxford University's new course on the Minoans and Mycenaeans, which will include investigations into the Atlantis tale in relation to the eruption of the Santorini volcano. Kershaw also runs the European Studies Classical Tour for Rhodes College and the University of the South. He has written several books, including A Brief Guide to the Greek Myths and A Brief History of the Roman Empire. Dr. Kershaw lives in England.
Loading...
or support indie stores by buying on