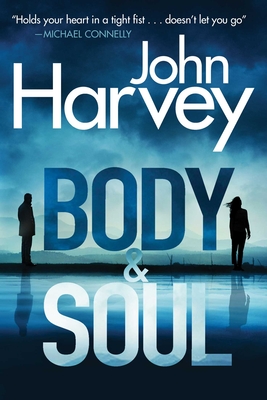 From a master of modern crime writing comes the landmark last novel in the exemplary Frank Elder mystery series.

When his estranged daughter Katherine suddenly appears on his doorstep, Elder knows that something is badly wrong.

The breakdown of her relationship with a controversial artist has sent her into a self-destructive tailspin which culminates in murder. And as Elder struggles to protect Katherine and prove her innocence, the terrors of the past threaten them both once more.

"Well-rounded, sympathetic characters have always been a hallmark of Harvey's work, and he's at his best here. The richest character of all is Elder himself, tough on the job but stopped in his tracks by a song."
— Marilyn Stasio

"Harvey’s taut, fast-paced plotting and lean prose lead to a heartbreaking climax. Body & Soul is both a top-notch procedural and a powerful tale of a gulf between a father and daughter — and the ties that can bind them together."
— Seattle Times

"Harvey writes with great power about the disappointments and tragedies of living, and he always digs deep into the emotional recesses of his characters—all of which makes the devastating ending of this remarkable novel all the more powerful."
— Booklist

"A story of deep emotional truth, with good people seeking to restore lost things and regretting their memories. There’s enough tension in this book to please any lover of a good detective story and quality writing that will satisfy general fiction fans."
— Library Journal (starred)

"Harvey’s lean prose and fast pace keep the pages turning. A few terrifying twists up the stakes and a shocking finale will have readers reeling. Procedural fans with a soft spot for P.I. tales will love this, but a father’s love and a young woman trying desperately to crawl out of the darkness and into the light are at the heart of this crackling tale."
— Criminal Element

"Fans of John Harvey’s books are already familiar with his signature sharp dialogue construction and subtle character development. This novel is not an exception. A good read from a master of crime storytelling."
— Mystery Tribune

John Harvey is the author of the richly praised Charlie Resnick novels, the first of which, Lonely Hearts, was named by the London Times as one of the "100 Best Crime Novels of the Century." John's first novel featuring Detective Inspector Frank Elder, Flesh and Blood, won the CWA Silver Dagger in 2004. In 2007 he received the Crime Writers Association Cartier Diamond Dagger for Sustained Excellence in Crime Writing. John lives in London.
Loading...
or
Not Currently Available for Direct Purchase