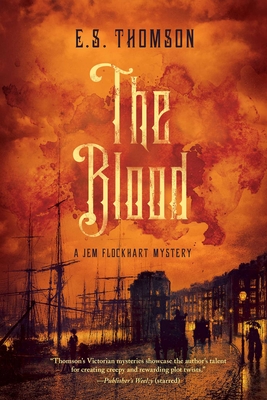 In a hunt that takes Jem Flockhart and Will Quartermain through the harrowing streets of Victorian London to the dangers of the seamen's floating hospital, The Blood, they will endeavor to solve a dark and terrible new mystery.

Summoned to the riverside by the desperate, scribbled note of an old friend, Jem Flockhart and Will Quartermain find themselves onboard the seamen's floating hospital, an old hulk known only as The Blood, where prejudice, ambition, and murder seethe beneath a veneer of medical respectability.

On shore, a young woman, a known prostitute, is found drowned in a derelict boatyard. A man leaps to his death into the Thames, driven mad by poison and fear. The events are linked—but how? Courting danger in the opium dens and brothels of the waterfront, certain that The Blood lies at the heart of the puzzle, Jem and Will embark on a quest to uncover the truth. In a hunt that takes them from the dissecting tables of a private anatomy school to the squalor of the dock-side mortuary, they find themselves involved in a dark and terrible mystery.

"Thomson's third Jem Flockhart mystery is grim but compelling, with a righteous heroine you can't help but root for."
— Kirkus Reviews

"From its grime-crusted back alleys to its blood-spattered operating tables, The Blood emanates atmospheric appeal. Victorian England, in all its smog, lace and polluted waters, is compellingly conjured in every sentence, giving the setting not only a historical bent, but a macabre horror aesthetic as well. At the heart of it all is Thomson's keen insight into the equally fascinating and nauseating medical history of the period. Featuring a feminist Sherlock Holmes in a Dickensian setting, The Blood delivers quick pacing and satisfyingly grotesque set pieces."
— Shelf Awareness

"Not for the fainthearted, this riveting mystery is similar in theme to Lawrence Goldstone’s Anatomy of Deception and Ambrose Parry’s The Way of All Flesh."
— Booklist (starred)

"Another gem of a deftly crafted novel in author E. S. Thomson’s Jem Flock mystery series, The Blood is a riveting read from beginning to end."
— Midwest Book Review

"After a while the Grand Guignol effects start to get under your skin?unless that’s just the ­leeches crawling out of their jar."
— New York Times Book Review [praise for the Jem Flockhart Mystery Series]

"A beautifully dark portrait of Victorian London that Charles Dickens would feel right at home in. With macabre portrayals of anatomy, science, and death, this Dickensian crime novel is not to be missed."
— Criminal Element [praise for the Jem Flockhart Mystery Series]

"The Blood is a tale giving a view of what Victorian London was really like, not the prim and proper showcase of a public television set, but a callous and heartless venue where society was broken into immutable classes and death was the only equalizer."
— New York Journal of Books