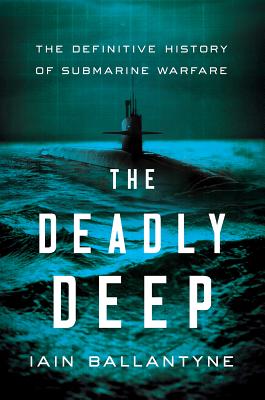 The Definitive History of Submarine Warfare

The fascinating story of the submarine’s evolution from its ancient beginnings to its culmination as the deadliest vessel ever invented.

A fascinating and comprehensive account of how an initially ineffectual underwater boat—originally derided and loathed in equal measure—evolved into the most powerful and terrifying vessel ever invented—with enough destructive power to end all life on Earth.

Iain Ballantyne considers the key episodes of submarine warfare and vividly describes the stories of brave individuals who have risked their lives under the sea, often with fatal consequences. His analysis of underwater conflict begins with Archimedes discovering the Principle of Buoyancy. Our clandestine journey then moves through the centuries and focuses on prolific characters with deathly motives, including David Bushnell, who in 1775 in America devised the first combat submarine with the idea of attacking the British.

Today, nuclear-powered submarines are among the most complex, costly ships in existence. Armed with nuclear weapons, they have the ability to destroy millions of lives: they are the most powerful warships ever created. At the heart of this thrilling narrative lurks danger and power as we discover warfare’s murkiest secrets.

Praise For The Deadly Deep: The Definitive History of Submarine Warfare…

"Tells the story of undersea warfare entertainingly, without skimping on technical details. The book is full of entertaining and moving stories, especially of the British submariners. An indispensable book for anyone interested in naval history and a great read for everyone else."
— Kirkus Reviews (starred)

"A comprehensive history of the submarine. With this overview of the revolutionary warship, Ballantyne ably introduces readers to a subject that boasts an immense bibliography. A great selection for any general interest collection."
— Booklist (starred)

"Iain Ballantyne plunges you into the thick of the action. This book surely confirms Iain Ballantyne’s position in the front rank of contemporary naval historians."
— Captain John Roberts, Royal Navy, author of Safeguarding the Nations

"A most enjoyable and inspiring read."
— Stuart Crawford, Cable Magazine

"A comprehensive, informative, and thoroughly enjoyable history of this lesser-known aspect of warfare. It should be on the bookshelf of every serious military historian and enthusiast."
— Warships International Fleet Review

"A brilliant deep dive into submarine warfare, from ancient Greek divers right up to our current nuclear fleet."
— Mail on Sunday (UK)

"The author provides us with a global appraisal. Ballantyne skillfully narrates intriguing stories about submarine commanders, sailors, and their boats during their quasi-piratical wartime encounters; each is a fast-moving gem of a tale."
— Northern Mariner

Iain Ballantyne has covered naval and military issues for prestigious publications published on behalf of NATO and the Royal Navy. His recent books include Killing The Bismarck; Hunter Killers; and Bismarck: 24 Hours to Doom, all published in England. Iain lives in England.
Loading...
or
Not Currently Available for Direct Purchase