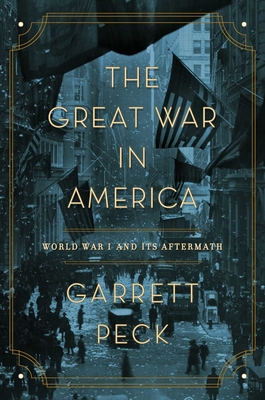 The Great War in America

World War I and Its Aftermath

A chronicle of the American experience during World War I and the unexpected changes that rocked the country in its immediate aftermath—the Red Scare, race riots, women’s suffrage, and Prohibition.

The Great War’s bitter outcome left the experience largely overlooked and forgotten in American history. This timely book is a reexamination of America’s first global experience as we commemorate WWI's centennial. The U.S. steered clear of the Great War for more than two years, but President Woodrow Wilson reluctantly led the divided country into the conflict with the goal of making the world “safe for democracy.” The country assumed a global role for the first time and attempted to build the foundations for world peace, only to witness the experience go badly awry and it retreated into isolationism.

The Great War was the first continent-wide conflagration in a century, and it drew much of the world into its fire. By the end, four empires and their royal houses had fallen, communism was unleashed, the map of the Middle East was redrawn, and the United States emerged as a global power—only to withdraw from the world’s stage.

The United States was disillusioned with what it achieved in the earlier war and withdrew into itself. Americans have tried to forget about it ever since. The Great War in America presents an opportunity to reexamine the country’s role on the global stage and the tremendous political and social changes that overtook the nation because of the war.

Praise For The Great War in America: World War I and Its Aftermath…

"Peck’s pointillist picture of America on the home front will be sure to interest World War I buffs. He has much to say about war bonds and War Gardens, anti-German hysteria and the deplorable suppression of civil liberties. He also follows the doughboys to Belgium and France, where they discover the French fry but shell shock, too."
— Wall Street Journal

"The Great War in America plumbs the decision of Woodrow Wilson to send American soldiers into the nightmare of trench warfare during the latter 19 months of World War I and how winning the peace created the inevitability of World War II."
— Providence Journal

"A new history of World War I, viewed through the lens of America, where it ‘was an enormously contentious issue.’ Peck proves a reliable guide to ‘a nation that was rapidly growing up—and yet not mature enough to accept its global responsibilities.’ Students of 20th-century American and European history will enjoy this American view of the war and its long-term consequences."
— Kirkus Reviews

"The story traces America’s journey from geopolitical isolation to engagement and back to a more committed isolation — a retrenchment that, like Woodrow Wilson, Peck considers a mistake. Along the way, Peck shares plenty of details worthy of their own histories."
— Washington Post

"Peck's compact book is an immensely readable account. His affection for his subject shines through the book."
— Washington Independent Review of Books [previous praise for Garrett Peck]

"Peck's book reminds us that Whitman is all around us. Whitman's Washington years overall provide an engaging read that reminds us that in this area, we are uniquely surrounded and suffused with the history of our nation."
— WNBC/Current Newspapers [previous praise for Garrett Peck]