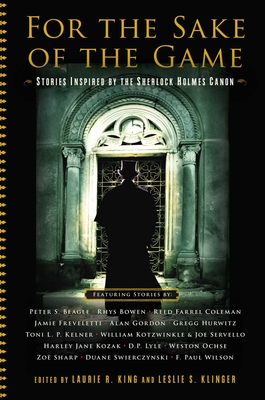 For the Sake of the Game

"Entertaining. This volume contains something for every fan of the Baker Street sleuth."
— Publishers Weekly

"King and Klinger have commissioned 14 new stories that make up their wildest, weirdest crop yet."
— Kirkus Reviews

"Many of the stories are fascinating in their inventiveness. There’s plenty of mystery, of course, but there are also elements of fantasy and sci-fi, as well as a comic strip with an insectoid Holmes."
— Seattle Book Review

"An amazing array of stories. This collection is a must for Sherlock Holmes devotees this holiday season."
— Brooklyn Fans

Leslie S. Klinger is one of the world’s foremost authorities on Sherlock Holmes. He is the editor of the three-volume The New Annotated Sherlock Holmes. The first two volumes, The Complete Short Stories, won the Edgar for “Best Critical/Biographical” work. He is also the editor of the hugely successful The New Annotated H. P. Lovecraft. Klinger is a member of the Baker Street Irregulars and lives in Malibu, California.
Loading...
or
Not Currently Available for Direct Purchase