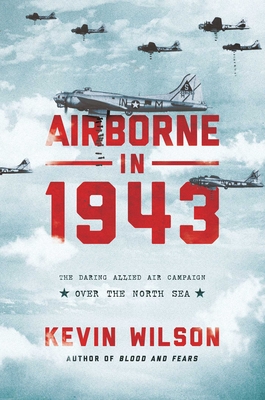 The Daring Allied Air Campaign Over the North Sea

A gripping account of the heroism of bomber planes in 1943—the year the “Dambusters” embarked on a campaign to try to win World War II in one quick stroke.

The year 1943 saw the beginning of an unprecedented bombing campaign against Germany. Over the next twelve months, tens of thousands of aircrews flew across the North Sea to drop bombs on German cities. They were opposed not only by the full force of the Luftwaffe, but by a nightmare of flak, treacherously icy conditions, and constant mechanical malfunction. Most of these courageous crews were either shot down and killed or taken prisoner by an increasingly hostile enemy.

This is the story of the everyday heroism of these crews in the days when it was widely believed that the Allies could win the Second World War by air alone. American pilots had a special role in the “Dambusters” campaign in particular. Even before the attacks on Pearl Harbor, scores of eager pilots travelled across the Canadian border to train with other future “Dam-busters,” all eager to take part.

Authoritative and gripping, Airborne in 1943 brings these remarkable men and women to vivid life.

Praise For Airborne in 1943: The Daring Allied Air Campaign Over the North Sea…

"In this meticulously researched work, Wilson lays out an exacting reconstruction of the aerial campaign of 1943. A vivid, complex picture of this phase of the war, with an eye toward remembering those involved as increasingly unappreciated heroes. This is a solidly written, engaging military history."
— Publishers Weekly

"A densely detailed, chronological, frequently gruesome account of British bomber operations against Germany in 1943.The author has mined the archives and interviewed dozens of elderly survivors, so his accounts of perhaps 100 missions are rich in anecdotes as well as nuts-and-bolts technical descriptions, fireworks, blunders, courage, and death.This record of essentially all 1943 British air operations will appeal to military buffs."
— Kirkus Reviews

"A detailed history of WWII air campaigns. Airborne in 1943 is just the book to hand history buffs committed to knowing everything about WWII."
— Booklist

Kevin Wilson has spent most of his working life as a staff journalist on British national newspapers, including the Daily Mail and the Sunday Express. He is the author of Blood and Fears and Airborne in 1943, also published by Pegasus Books.
Loading...
or
Not Currently Available for Direct Purchase