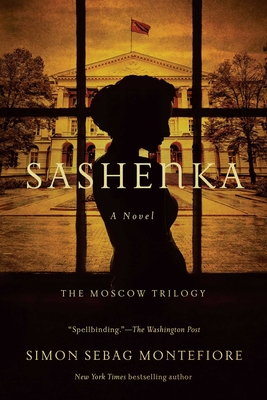 Sashenka launches the critically acclaimed "Moscow Trilogy," where the love and intrigue, betrayal and fear, war, revolution and terror of twentieth century Russia are brought to life in these compelling stories and unforgettable characters.

Winter 1916: St. Petersburg, Russia, is on the brink of revolution. Outside the Smolny Institute for Noble Girls, an English governess is waiting for her young charge to be released from school. But so are the Tsar's secret police...Beautiful and headstrong, Sashenka Zeitlin is just sixteen. As her mother parties with Rasputin and their dissolute friends, Sashenka slips into the frozen night to play her part in a dangerous game of conspiracy and seduction.Twenty years later, Sashenka is married to a powerful, rising Soviet leader with whom she has two children. Around her people are disappearing, while in the secret world of the elite her own family is safe. But she's about to embark on a forbidden love affair that will have devastating consequences.Sashenka's story lies hidden for half a century, until a young historian goes deep into Stalin's private archives and uncovers a heartbreaking tale of betrayal and redemption, savage cruelty and unexpected heroism—and one woman forced to make an unbearable choice.

Furiously readable. A brilliantly plotted novel that brings home with unique intimacy the joys and hopes of
Russian families, the Revolution, the horror of the thirties.
— Thomas Keneally, author of Schindler’s List

Montefiore is a natural storyteller who brings his encyclopedic knowledge of Russian history to life
in language that glitters like the ice of St. Petersburg. Spellbinding.

Simon Sebag Montefiore's prize-winning, bestselling novels are published in twenty-seven languages. Red Sky at Noon is the last of the acclaimed Moscow Trilogy, which includes Sashenka and One Night in Winter, which was long-listed for the Orwell Prize. Montefiore's nonfiction books include Jerusalem: The Biography, a #1 Holiday Book Pick on the TODAY show, Young Stalin, winner of the Los Angeles Times Book Prize for Biography, and most recently, The Romanovs, which was a New York Times bestseller. Visit him at www.simonsebagmontefiore.com or on twitter @simonmontefiore.
Loading...
or support indie stores by buying on