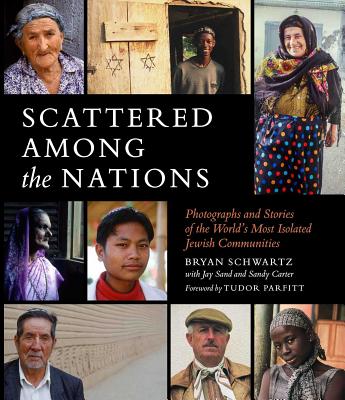 Scattered Among The Nations

With vibrant photographs and intricate stories Scattered Among the Nations tells the story of the world’s most isolated Jewish communities in Africa, Asia, Latin America, the Former Soviet Union and the margins of Europe.

Over 2,000 years ago, a shipwreck left seven Jewish couples stranded off India’s Konkan Coast, south of Bombay. Those hardy survivors stayed, built a community, and founded one of the fascinating groups described in this book—the Bene Israel of India’s Maharasthra Province. This story is unique, but it is not unusual. We have all heard the phrase “the lost tribes of Israel,” but never has the truth and wonder of the Diaspora been so lovingly and richly illustrated. To create this amazing chronicle of faith and resilience, the authors visited Jews in 30 countries across five continents, hearing origin stories and family histories that stretch back for millennia.

Sixteen chapters featuring photographs and stories of the world’s most isolated Jewish communities, from:

- The hills of northeastern India, on the border of Myanmar

- Sub-Saharan Africa, in Ghana, on the border of Ivory Coast

- The last Jewish villages in Eastern Europe and Central Asia

- Jews at the heart of the Amazon

- Marranos coming out of hiding in Portugal and Mexico

- Jewish gauchos and ostrich barons, in the Argentine pampas and the South African veld

A foreword from Tudor Parfitt, and over 500 full color photographs and illustrations accompany these beautiful stories, and many more. The culmination of 16 years of collaboration between writers and photographers, Scattered Among the Nations is a stunning work of research and storytelling, and a rich visual documentation of the planet’s most isolated and unusual Jewish communities. Above all, it is a testament to the power of the Jewish people, and the connection that binds such different groups into one great tribe.

Praise For Scattered Among The Nations…

"We talk about how Jews live everywhere but Bryan Schwartz has actually visited them and photographed and recorded their stories. These unforgettable images and the corresponding text are beautiful, even breathtaking. Scattered Among the Nations is a Jewish (Inter) National Geographic, wisely reminding us that the strategies for survival of Jews in distant lands may be relevant to our own."
— Rabbi Lawrence Kushner, Emanu-El Scholar at Congregation Emanu-El of San Francisco and author of books on Jewish spirituality and mysticism, including I'm God; You're Not (Jewish Lights)

This excuisite book is a gift to the Jewish people, dramatically stretching our understanding of "Jewish." Bryan Schwartz reminds us that we are an "am olam"—at once an eternal people and a people of the world. A book to be savored, read and re-read, and transmitted from one generation to the next.
— Yossi Klein Halevi, Senior Fellow, Shalom Hartman Institute, Jerusalem

Since the destruction of the ancient Temple in Jerusalem, Jews have found the abundance of diversity in cultures of the Diaspora a perfect cauldron for creating their unique brand of Judaism over several millenia. Scattered Among the Nations is a splendorous testament to the adaptability, richness, and beauty of the relationship between these Diasporic Jews and the nations they call home.
— Yale Strom, Award-winning artist/ethnographer, artist-in-residence Jewish Studies Program, San Diego State University

With eloquent words and superb photos, Schwartz, Sand, and Carter introduce us to our Jewish brothers and sisters in isolated Jewish communities around the world. The authors take us on a profound and fascinating journey to witness the diversity of these communities and their shared passion for Judaism.
— Harriet Bograd, President, Kulanu, Inc.

"It is when we witness the full panoply of our varied worldwide cultures that we begin to understand who and what the Jewish people actually are. Bryan Schwartz’s beautiful pictures and profound writing help us view the large horizon of the origins and the reach of Judaism and its believers in every corner of this planet. From the Amazon to Ghana; from India to Bukhara; this book tells a wonderful story in brilliant and exciting prose and stunning pictures; a story that needs to be told. There is no better way to reflect in high relief the full range of this glorious people and its remarkable history."
— Rabbi Steve Gutow, President and CEO, Jewish Council for Public Affairs

"Finally, a beautifully presented book on Jewish diversity around the world brings to the forefront what we might have thought was well known, and breaks down not only stereotypes, but opens windows into lives from the hills of Portugal to the plains of Africa."
— The Jerusalem Post

"In an age when ethnic and religious clashes are all too common, a book like this offers a lot of hope. The people in these pictures are of all ages, shapes, skin colors and social status. Many have endured drought, famine, and persecution. But they aren’t talking about their hardships. Instead, they are excited to share their candles, their ostrich feathers, their faith in any language."
— The Jewniverse

“Scattered Among the Na­­tions has beautiful pictures—of men, women and chil­dren, homes, synagogues and landscapes—but it is not just a dramatic collection of images. The stories noted in the subtitle are eye-opening histories of far-flung communities and fascinating tales of charismatic leaders.”
— Hadassah Magazine

Bryan Schwartz, an Oakland, California-based civil rights attorney, conceived Scattered Among the Nations in the spring of 1999, visiting Jews in 30 countries and over 100 towns and villages on five continents over the following several years. Through their unshakeable devotion and unbounded warmth and kindness, these communities inspired Bryan with new enthusiasm for Jewish practice. Bryan led the effort to create Scattered Among the Nations, Inc. (www.scatteredamongthenations.org), a nonprofit organization designed to educate about Jewish diversity and assist isolated Jewish communities in gaining the recognition and resources to meet their needs. Bryan has spoken to audiences around the world regarding Scattered Among the Nations. His images, articles, and discourse regarding diverse Jewish communities have been published worldwide, among other places, by National Geographic, Fox News, NPR, KPFA, Ha’aretz, The Jewish Forward, Jerusalem Report, Hadassah, B’nai B’rith, and Moment. Bryan’s “Scattered Among the Nations,” “Jews of Color: In Color!” and “Jews of Color: a Renaissance” exhibits have shown throughout the United States since 2003, at galleries, universities, synagogues, Jewish Community Centers, and Jewish museums. Bryan has always been involved in the Jewish community. As a young man, he was an international vice president of the B’nai B’rith Youth Organization. Now he is an active member and the past president of Oakland’s Temple Beth Abraham synagogue. Bryan hopes to continue visiting diverse Jewish communities in the years to come with his wife and two children.

Jay Sand, of Philadelphia, Pennsylvania, is a musician, educator, writer, and world traveler who has been documenting isolated Jewish communities since the 1990s. After years of creating and showing multimedia “Jews of Africa” presentations, in 2009, he founded All Around This World (www.allaroundthisworld.com), a global music and world cultures program for young children and their grown-ups.

Sandy Carter is a Bellingham, Washington photojournalist who previously co-authored the book, Women in Medicine: A Celebration of Their Work. She has photographed numerous documentary projects which have appeared in exhibitions and publications worldwide.
Loading...
or support indie stores by buying on