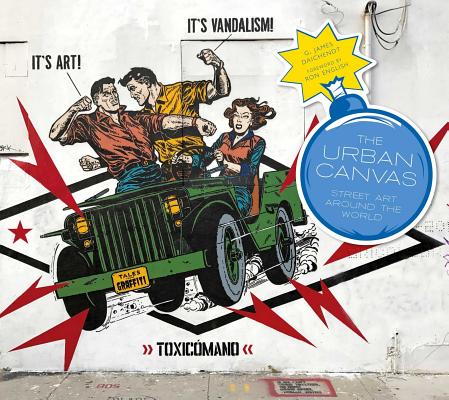 Street Art Around the World

The interaction with happened-upon street art is both physical and emotional, provoking a reaction and hopefully a conversation about the work this worldwide phenomenon. From backs of street signs to corporate boardrooms, its visibility, popularity, and diversity is what makes it so beloved. Highlighting some of the best work from around the world, The Urban Canvas is an extensive look at this art form and the artists that make it great.

Whether created as political message, social commentary, or simply visual entertainment, street art has reclaimed art from the privileged and brought it back into the open for everyone to experience. Art professor, critic, and historian G. James Daichendt presents street art from around the world in The Urban Canvas, an exploration of how this global art form has been influenced by local customs and culture.

G. James Daichendt is an art critic and art historian who serves as Dean of the Colleges and Professor of Art at Point Loma Nazarene University. Daichendt was the co-curator of the exhibit OutsideIn: The Ascendance of Street Art in Visual Culture at the ArtCenter College of Design. He lives in Carlsbad, California.

Ron English is an artist whose work is displayed in the streets of Los Angeles, London, and Berlin, as well as in galleries in New York City, Paris, and Rome. He lives in New York.
Loading...
or
Not Currently Available for Direct Purchase