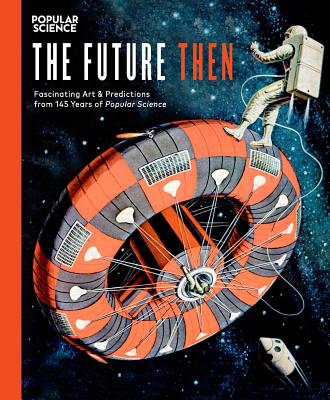 The Editors of Popular Science

To commemorate the 145th anniversary of Popular Science, this gorgeous, full-color, fun, and lively collection of retro covers from the magazine’s archives explores all those far-flung inventions that never quite made it off the drawing board—from flying cars to personal jet packs—and tracks the evolution of those innovations that did.


A lot has happened since 1872, the first year that Popular Science hit the newsstand. From the introduction of the automobile in 1879 to the dropping of the A-bomb in 1945, from the first time a cell phone rang in 1973 to the first flyby of Pluto in 2015, Popular Science was there and chronicled it all.

The Future Then steps you through this illustrious history of scientific and technological breakthroughs, diving deep into the magazine’s archives to share more than 400 fascinating covers. Organized by decade, each chapter opens with a discussion of the era’s major advancements, then launches into a selection of the decade’s most compelling covers—each accompanied by the fascinating story of the featured technology. With special breakouts on the beloved artists behind the charming illustrations and clever insights into how the past century’s near misses led us to true innovation gold, The Future Then is your first-class ticket on a ride to the retrofuture.

Popular Science is the world’s largest science and technology magazine, with 6.1 million print readers and 10 million monthly page views on PopSci.com. The publication explores the intersection of science and everyday life, providing science and tech news, along with tons of fascinating DIY projects for beginning tinkerers and pro builders alike. Founded in 1872, Popular Science is one of the oldest continuously published magazines in the United States, and is published in five languages and nine countries.
Loading...
or support indie stores by buying on