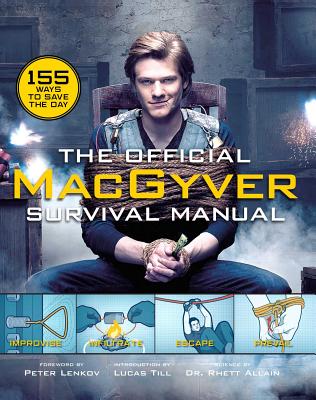 155 field-tested hacks, tips, and on-the-fly solutions for the next time you're captured by Russian spies.

For over 30 years, the name MacGyver has been synonymous with astonishing feats of ingenuity, from fixing a car with nothing but water and egg whites to busting out of jail using a hairpin and a pair of repurposed handcuffs to, of course, saving the world with his favorite weapon, a simple paperclip.

What you might not know is that every trick that the resourceful secret agent pulls off on CBS’s hit show has been tested and fact-checked by experts, and really works . . . most of the time. No one is saying that you should craft a DIY airplane out of trash bags and a lawnmower engine. But with this book, you could.

The first official how-to guide to the MacGyver universe, this book is packed with how-to drawings and step-by-step descriptions of the hacks that made this character the world’s most resourceful secret agent. Based on the hit new series, with shout-outs to the classic show that started it all.

Each section introduced by Dr. Rhett Alain, the show’s resident physicist, who helps ensure the show’s science is based in . . . something resembling reality.

Full-color photos illustrate Angus MacGyver in his element (which is to say, danger!), and illustrated how-to drawings show exactly how it was done. The best hacks to try at home for yourself are highlighted (as well the ones you really, really should never do without a team of physicists and a first aid kit handy). So grab a paper clip, a pen knife, and some duct tape and prepare to save the day!

Breaking In + Out: Dozens of hacks for when you’re in a tight spot—or want to get closer to one, including:

Break Out of Handcuffs Using a Hairpin
Using a Toothbrush to Pick a Lock
Detect an Intruder
Make a Battering Ram
Cut Through Steel
Escape from Zip Ties or Duct Tape
Use Vacuums to Scale a Wall, Spidey-Style

Tools + Technology: Making the most of what you’ve got on hand, in the most unexpected of ways, including:

Make a Stove from a Soup Can
Tie Essential Knots
Light a Fire with a Battery
The Science of Stun Guns
Build a Drone
Fake a Crime Scene
Make Buckets of Fake Blood
Could I Do That? Rig a Spy Microphone
Lift a Fingerprint

Traps + Getaways: Lure the bad guys in, then get out of Dodge!

Repairs + Rescues: When the chips are down and the stakes are big, it’s time for the really wild stuff, including: